I was eight years old and had fallen head over heels in love with Curd Jürgens.

In our little cinema in the suburbs of Lainz on the outskirts of Vienna, he had smiled at me and his blue eyes sparkling. The film was WIENER MÄDELN (1949, D: Willi Forst). I was seated on my mother’s lap for half-price entry and couldn’t imagine that Curd Jürgens could have been smiling at my mother or any another woman in the darkened room or even his partner in the film.

No – the smile was meant for me and it struck me in the heart.

It was easy to fall in love with Curd Jürgens. He was what they would call in Vienna “a snazzy guy”, manly, a counterpart to most film actors in the 1950s. There was something urbane about him – I couldn’t put my finger on it at the time – and the word “self-irony” wasn’t yet familiar to me. Curd had a lot of that. But what I saw and what I felt was the allure of a man who was obviously free, who was unashamedly aware of his erotic power and who enjoyed life – with no regrets and with no concessions to the double morality of the 1950s.

I grew older and fell in love with Karli Rauschmeier, the caretaker’s son. We would sit on the carpet pole and hold hands. I thought of Curd Jürgens leaning over Luise Ullrich and kissing her. His lips were pressed to hers, his nostrils quivered and Luise trembled when Curd let her go, and all but pushed her away in overpowering passion. That was in the film EINE FRAU VON HEUTE (1954), by the director Paul Verhoeven. Later he was to become my father-in-law. But I didn’t know that yet. 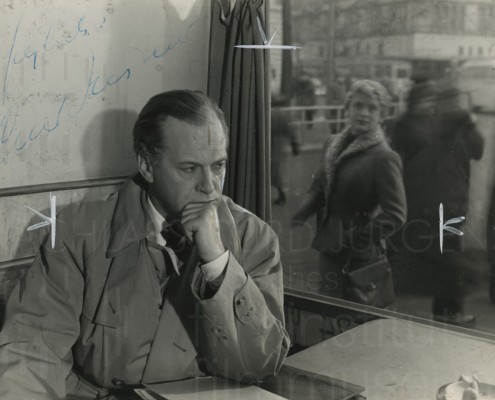 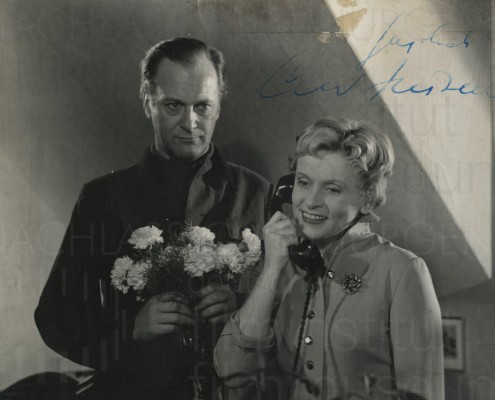 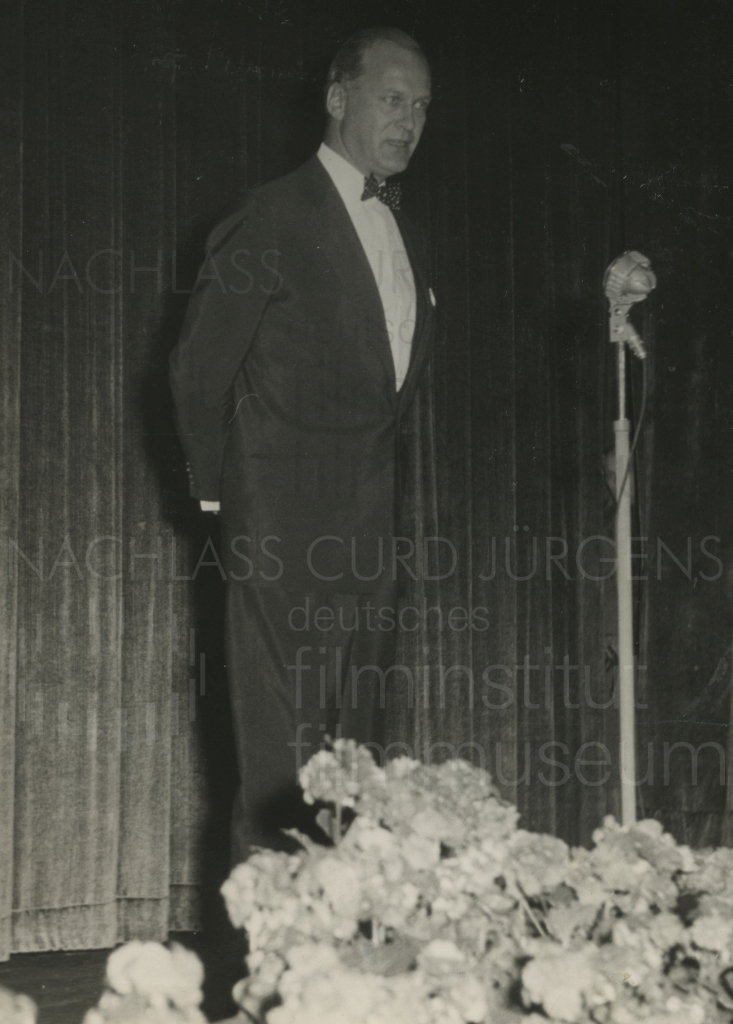 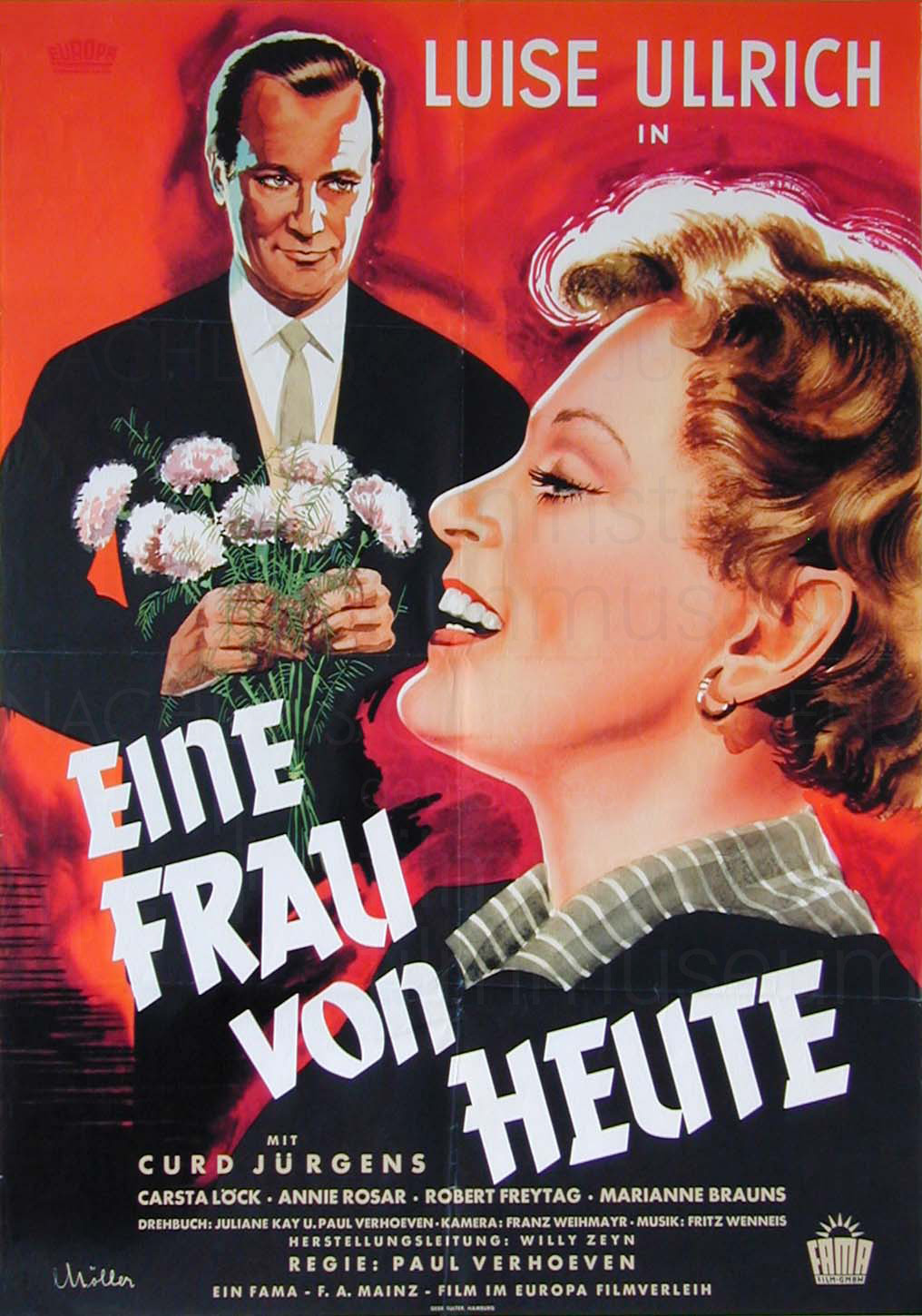 Curd Jürgens played the most beautiful of roles in my young girl’s dreams for a long time. I had a burning interest in everything about him, even his wives, who were all extraordinarily pretty but not always right for him, as I thought, and when he left them or they left him I’d say I’d known that that would happen all along and why hadn’t he asked me for my advice?

A few years later, Curd Jürgens began to work abroad and it seemed like he had always been part of the international film scene. Although he was so German, much more German than people in America and France thought.

Curd loved the German language and especially the soft variant spoken in Austria. He loved both these countries and their culture, their literature, music and theatre, to which he stressed he owed so much, and which remained a benchmark for him for all of his life.

I was studying at drama school. I now looked at Curd Jürgens critically, severely, with the demands due to someone one admires. I had seen him as Bruno in DIE RATTEN (1955), a mangy loser and unforgettable; of course, in DES TEUFELS GENERAL (The Devil’s General, 1954, D: Helmut Käutner) – a film unthinkable without him – and as a pimp in PRATERHERZEN (1953), a film by Paul Verhoeven. Paul had summoned Curd Jürgens to his theatre, the Brunnentheater in Munich, immediately after the end of the war to do some productions. Paul was both a director and an actor.

With Paul Verhoeven in “Leuchtfeuer” 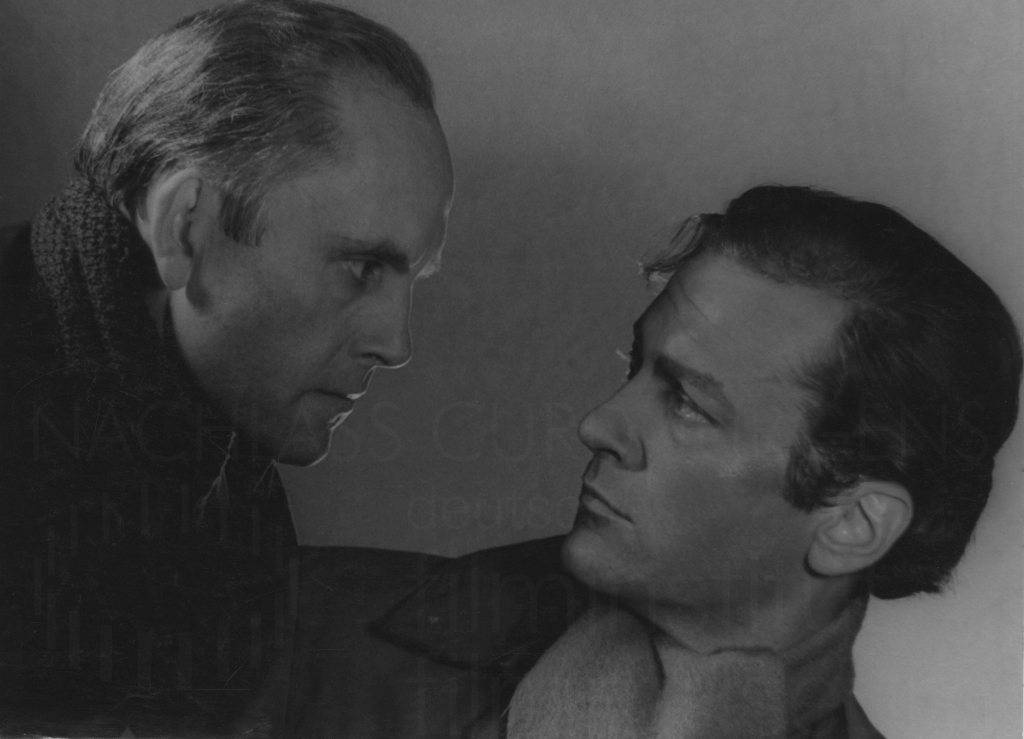 Request by Paul Verhoeven of the “Zuzugsamt” Munich, for the approval of Curd Jürgens’ relatives, 5.11.1949 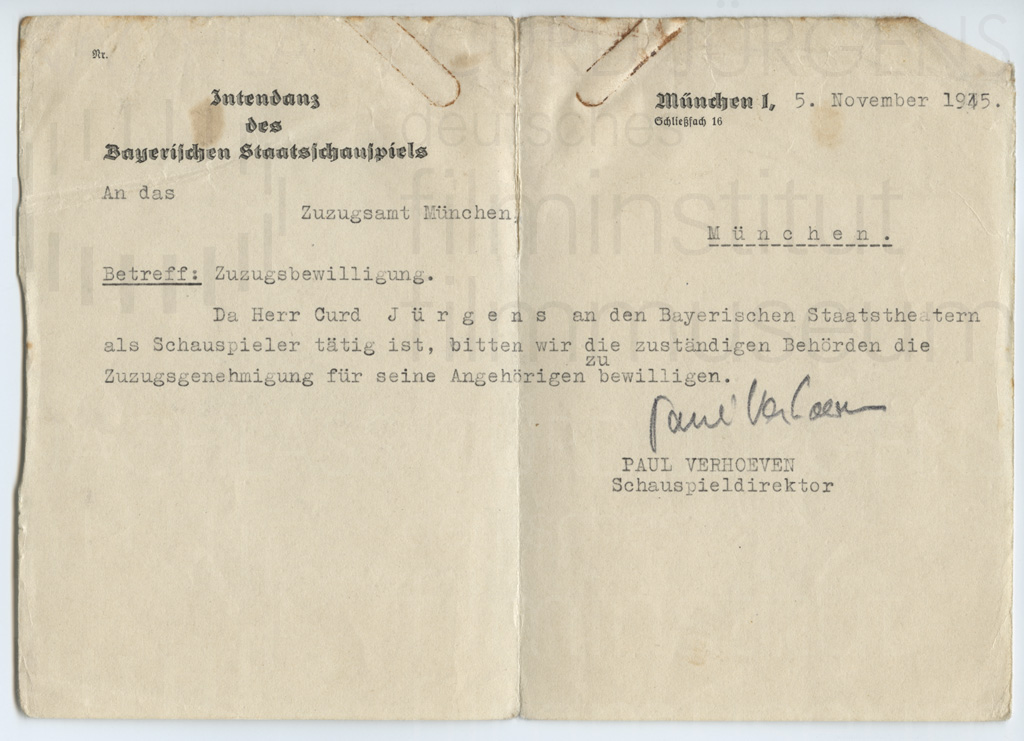 Although he has a rotund figure, his acting style was naturally quite “lean”, incidental, “modern” as they called it then. Curd spoke often and with great pleasure about how much he had learned from Paul both both professionally and personally. As Curd grew older, more and more of his acting style became like that of Paul Verhoeven, perhaps unconsciously. I loved my father-in-law. I later transferred some of this love to Curd.

Then a few years later – it was March 1961, still before my twentieth birthday – I’d already had some film roles and had the offer of filming some short stories with Curd Jürgens for American television. They were all centred around a married couple, the man experienced and indulgent, the woman young, uncertain and spirited. Her and him – in a comedy situation. In English!

The film was being shot in Munich and the night before the first day’s filming and before my first meeting with him, I didn’t get a wink of sleep. I came to the studio with my eyes all puffed up. I noticed him at once – of course – he towered above them all.

As I remember it, he was in charge of directing this piece. When they informed him of my arrival, he turned his head and his blue eyes flashed at me just like that time in the cinema in Lainz. Then he came up to me and kissed my hand. He kissed my hand!

Curd took care of everything. The costumes – less make-up please.

Letter of attorney for Curd Jürgens, set out by Paul Verhoeven. Munich, June 12, 1946 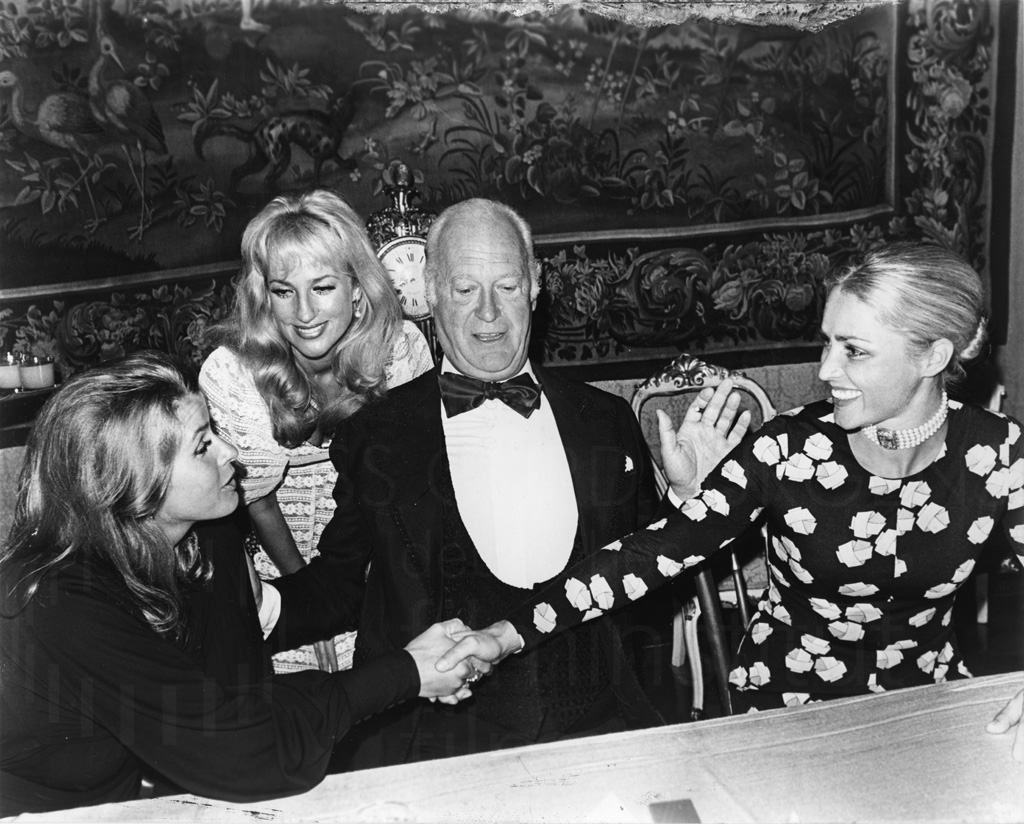 He liked flirting. And I did too. But when I blushed and didn’t recognise double-entendre as directness, he would give me a hug. He would not stand for indecencies. He saw how insecure I was about coming to terms with this new adult world. Then he would say “Girl, sing me something”, and I would sing him the Viennese songs he loved so much. I knew all of them and he knew most of them.

From then onwards we always met up again, in Hollywood, in Paris, in South Africa. When working, but until we appeared in von Hoffmannsthal’s “Jedermann” in Salzburg in 1974, more so at private occasions.

In the meantime I had married Michael Verhoeven. Curd had known and loved Michael from childhood, from the years in which he had been in and out of my in-laws’ house. He was so happy for us and pretended that Michael and I had only got together to make him happy.

“Jedermann”. 1974 to 1977. Significant years. Beautiful summers. Curd and I: Paramour and Everyman. We played a couple in love, an unusual interpretation of this man-woman-relationship that only death can sever.

Of course Curd completely filled the square in front of Salzburg Cathedral with his presence. Effortlessly, it seemed. But performing for two hours up there in the wind or searing sun cost him a lot of energy. I knew that. His hair had turned white and it fell in curls over his collar. It gave the impression that now, with age, he had more hair than when he was a young man. His allure remained unbroken. He brought all of his rich life to this role, the strength of the early years and the melancholy of the late ones

During the rehearsals for “Jedermann”, 1975 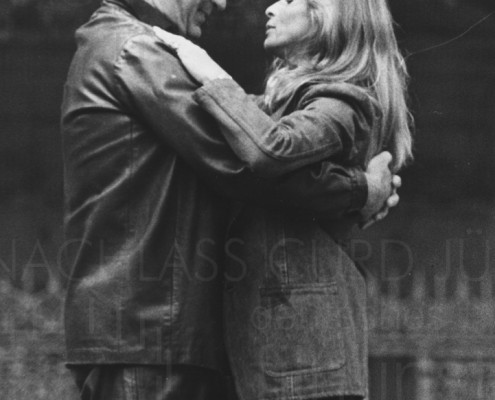 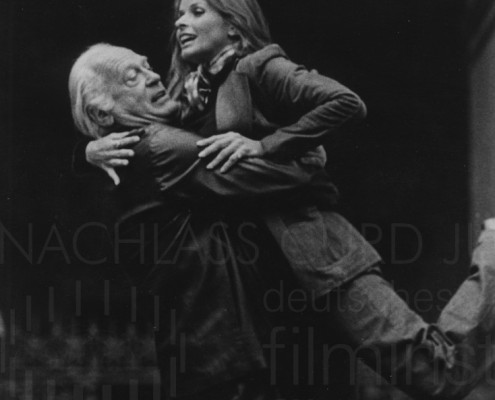 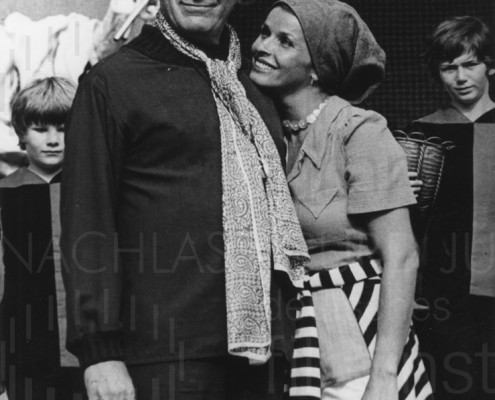 Curd was a thoroughly decent man who helped, even by listening, with encouragement. Self-mocking, yes … but never cynical. There were times when he tried to appear cynical, a form of elegance of sorts, but I never found that at all convincing.

Curd Jürgens – larger than life? No – as large as life.