TEUFEL IN SEIDE (1955, D: Rolf Hansen). Look, I’ve just remembered a story. My dear old friend Curd Jürgens starred in this film alongside my equally dear friend Lilli Palmer. Curd was really big business at the end of the 1950s. All of Europe knew him as “the devil’s general”. The Americans idolised him in ME AND THE COLONEL (1958, D: Peter Glenville). In Venice he had been awarded the Coppa Volpi for best acting performance. His films ran in thousands of local small cinemas. And all of them were hugely successful! 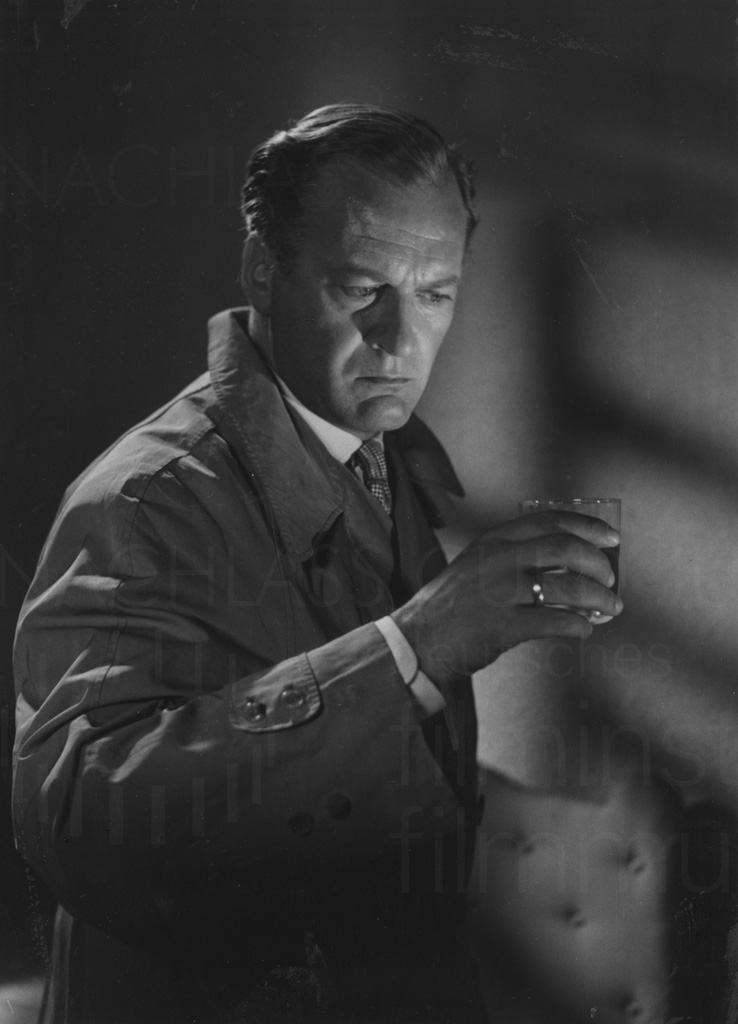 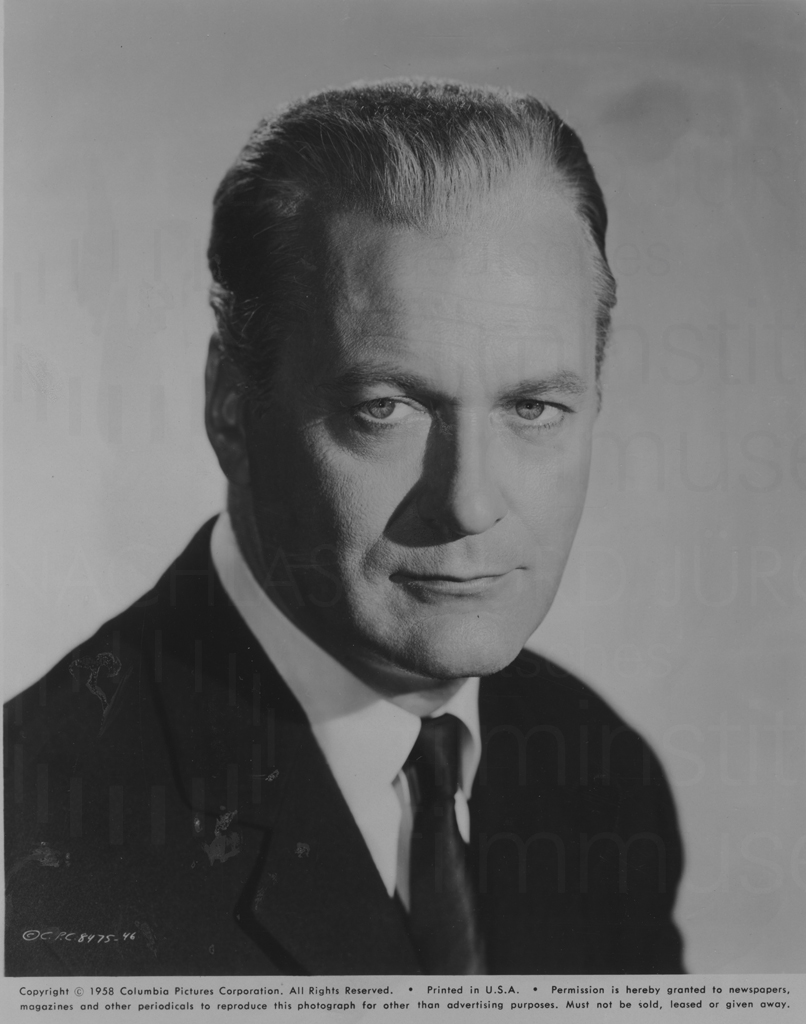 So Curd was a big fish, and the producers were throwing out bait to land this fish. A film with Curd Jürgens’ name in the opening credits was foolproof and was as good as ready money. To keep the angling analogy – the German producers’ bait, by which I mean pay, wasn’t tempting enough. Curd counted in six-figure sums and only understood the word “dollars”. And the Hollywood people were much better at enunciating that than the poor Europeans that we were.

Be that as it may, I didn’t give up the race. It is one of the most important qualities of a film producer always to reach for the stars; it is not for nothing that in my production office I have hanging the well-known plaque with the inscription: “We will do the impossible immediately. Miracles take a little longer.”
I bombarded Jürgens with ideas for film concepts, draft scenarios, completed scripts, with exciting material, with the most attractive role offers. I telephoned him, called in on him in his fairy-tale castle at Cap Farrat, I wrote him long letters.
His reaction was always the same. “Why should I work for 100,000 when I can work for 500,000? My dear Artur, can you answer me that?” He didn’t wait for me to answer but said: “See – you can’t.” “Does he still not want to do it?” Maria would ask, the best wife in the world, when I had tried once again. “He doesn’t want to,” I would say, slowly and without heart.
“Well, perhaps he will if you suggest Peer Gynt?” Peer Gynt, the seeker after God, the adventurer, the northern Faust, it’s a juicy role for any great actor. Hans Albers had played him in his inimitable manner. But that was nearly 25 years ago and nothing spoke against Curd Jürgens playing him again in his equally inimitable manner. If only he wanted to…
I considered how best to convince him of my idea this time. Then, out of the blue, Sonja Ziemann came to my assistance. “Artur,” she said on the phone, “I do hope you’ll be joining us at my house on the eighth. You will come, won’t you?” 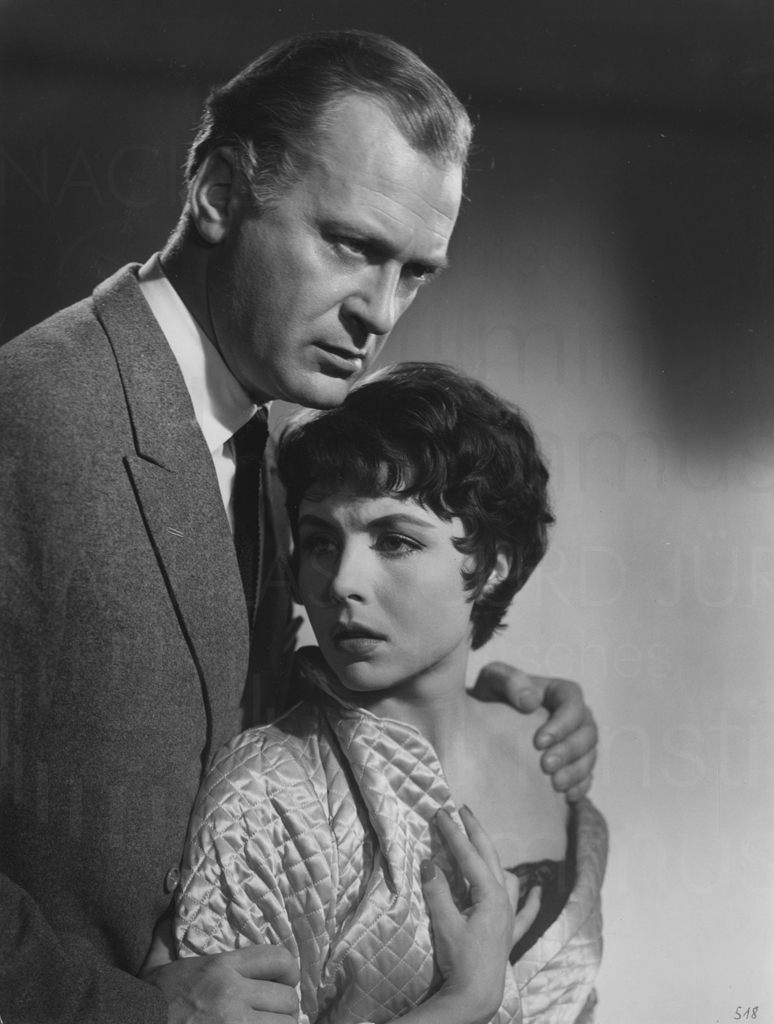 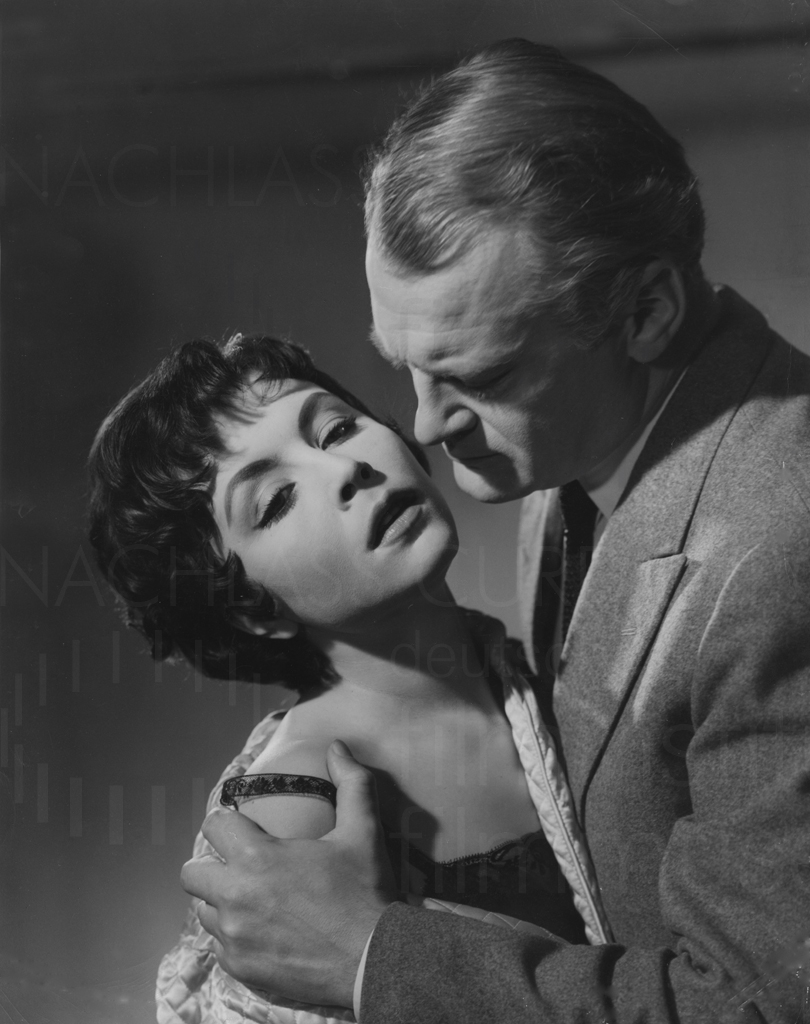 With Simone Bicheron and Sonja Ziemann, 1957 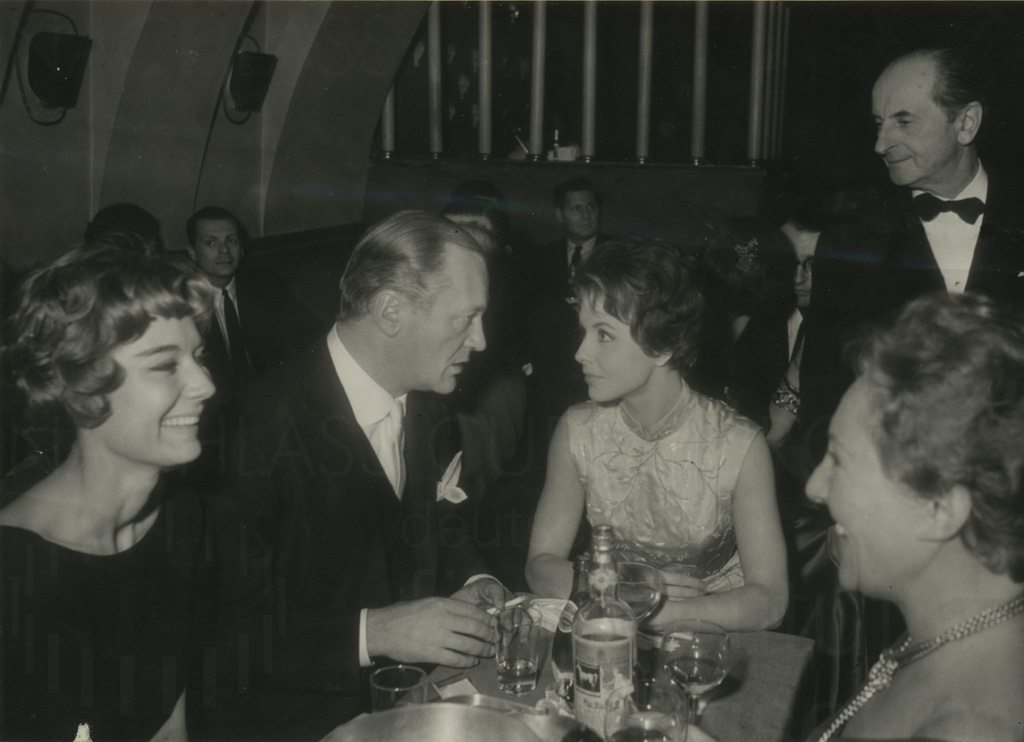 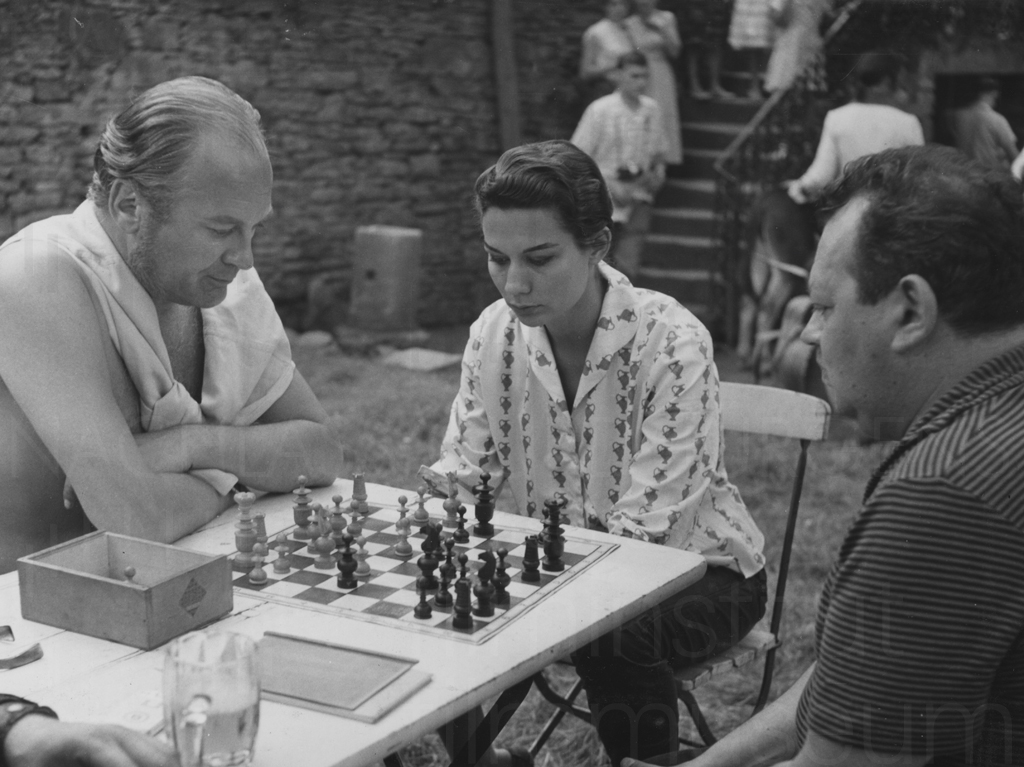 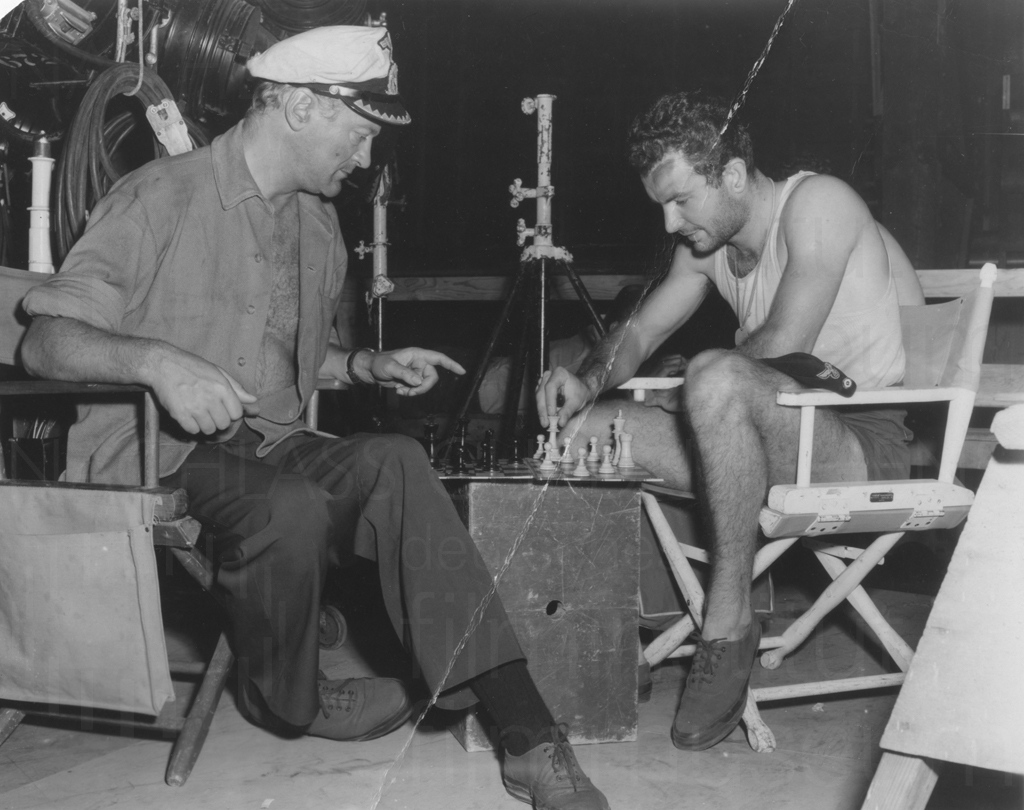 “Of course I will. You know that,” I replied. “But what is happening on the eighth?” “You used to have a better memory,” she said pointedly. Good heavens, your birthday, of course! The eighth of February (the year is now immaterial, after a certain age women get younger anyway) was the date when the “Black Forest Girl” had first seen the light of day. She intended on having a big-style celebration this time.

And it really was big-style. Things got pretty lively in the Zehlendorf mansion where Sonny lived with her parents.

Like Curd, she had reached a peak in her career. Anyone she invited was “in” – in today’s high society parlance. And any one she didn’t invite wondered desperately about the why and the wherefore of it all. Did it mean he was “out”?

I can’t be sure anymore which people were there, but the names on the guest list would have been enough to fill several columns of gossip in the tabloid newspapers. One name, however, I do remember very clearly. It was Curd Jürgens!

Curd was in great form. He sang “Happy Birthday” with me as a duet, drank champagne and whisky, spoke gushingly about how magnificent our collaboration had been on the DIE RATTEN. He was as charming as ever and looked even more stunning than usual. At most he was excelled by Simone Bicheron, a French fashion model who had just become Madame Jürgens.

Jürgens was in the type of good mood as only someone newly in love can be. Matters of business were strictly taboo. When I wanted to involve him in my “theme”, he would say: “Artur, I don’t understand one word you’re saying, it must be the acoustics here.”

Sometime during that night I wanted to put my glass down. I looked for a small corner on the shelf of the large wall cupboard and I discovered a chess set. Chess! A thought flashed through my mind. “King check, Jürgens check!” That was it!!! I went over to him and said casually: “They say you’ve become something of a chess grandmaster, Curd; is that so?”

“I wouldn’t say grandmaster, but I could take you on.” 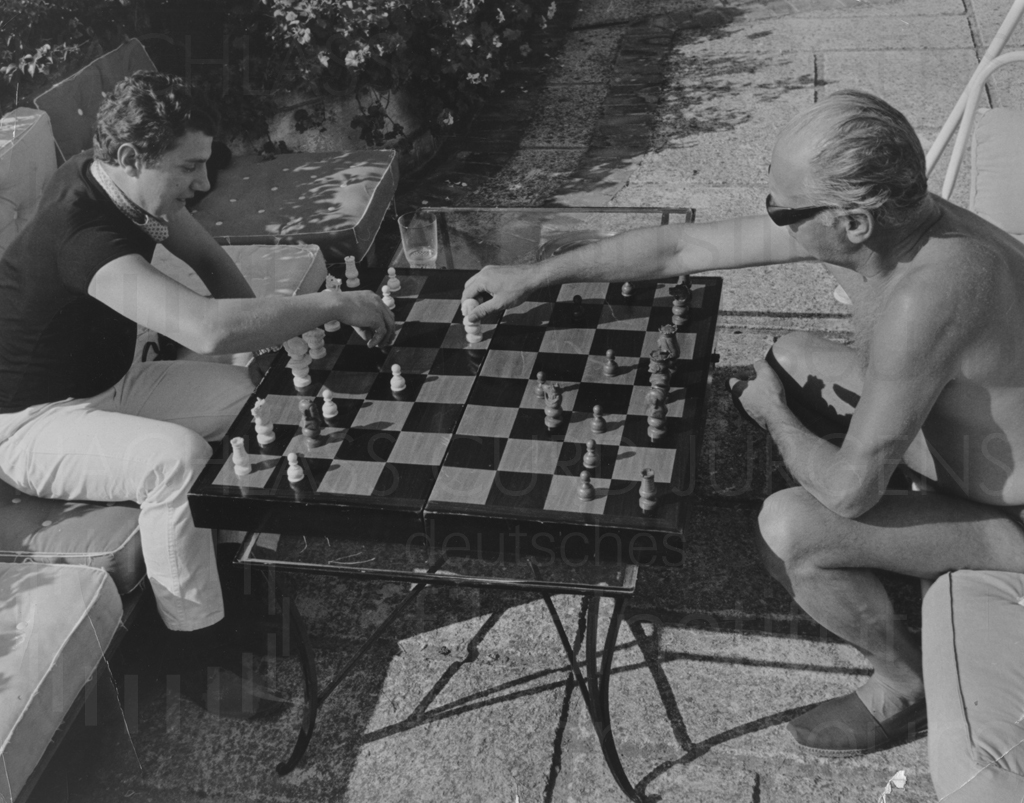 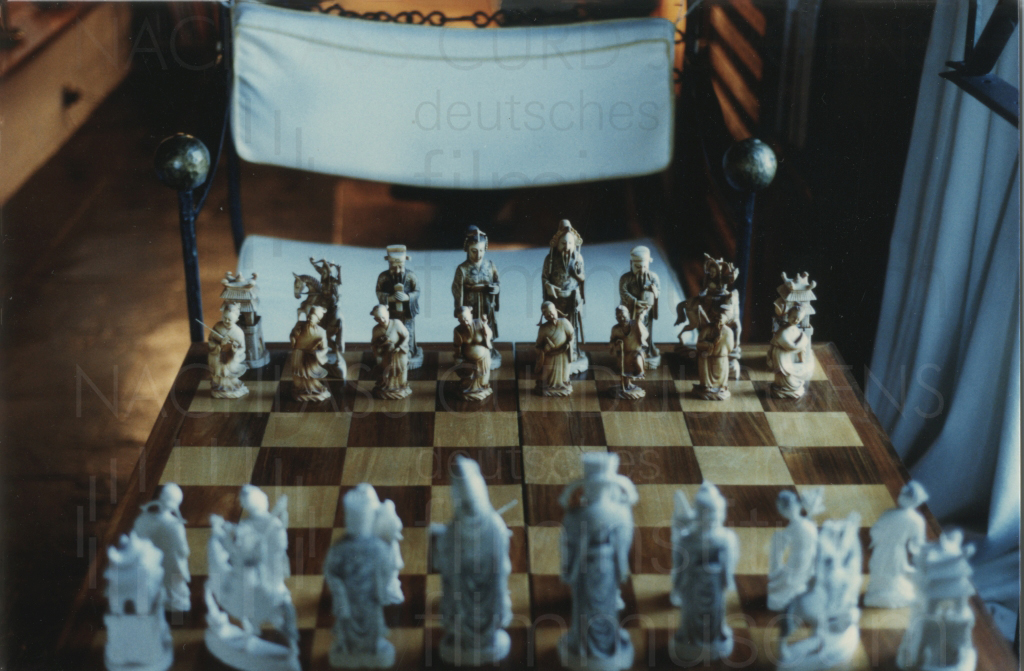 Curd and Simone Jürgens in Vence, Beginning of the 1970s 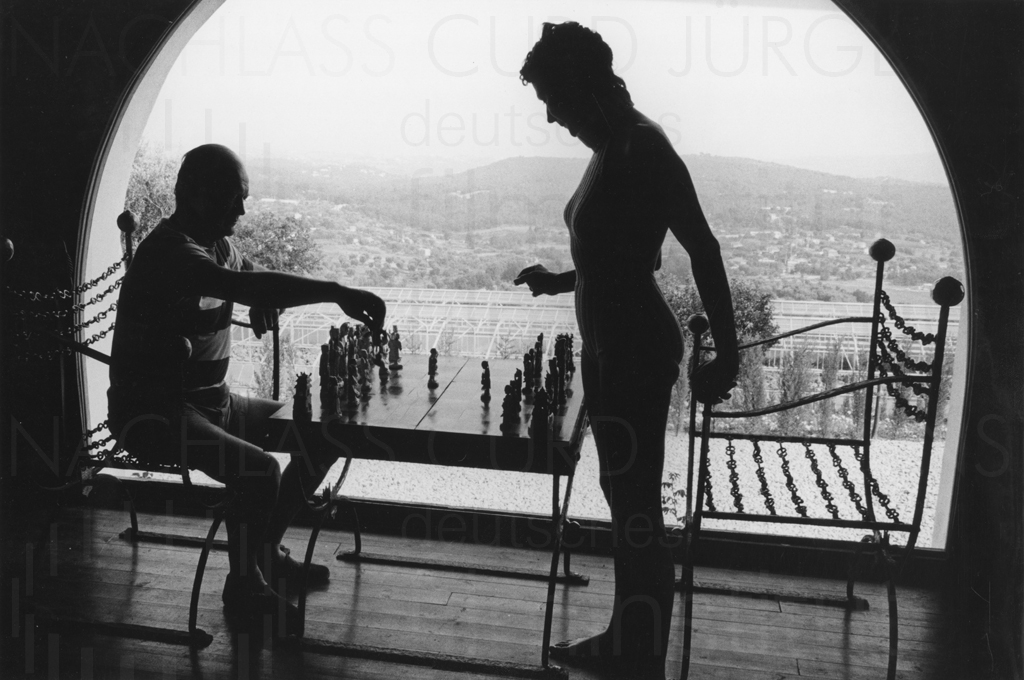 With Simone Jürgens in Vence, Beginning of the 1970s 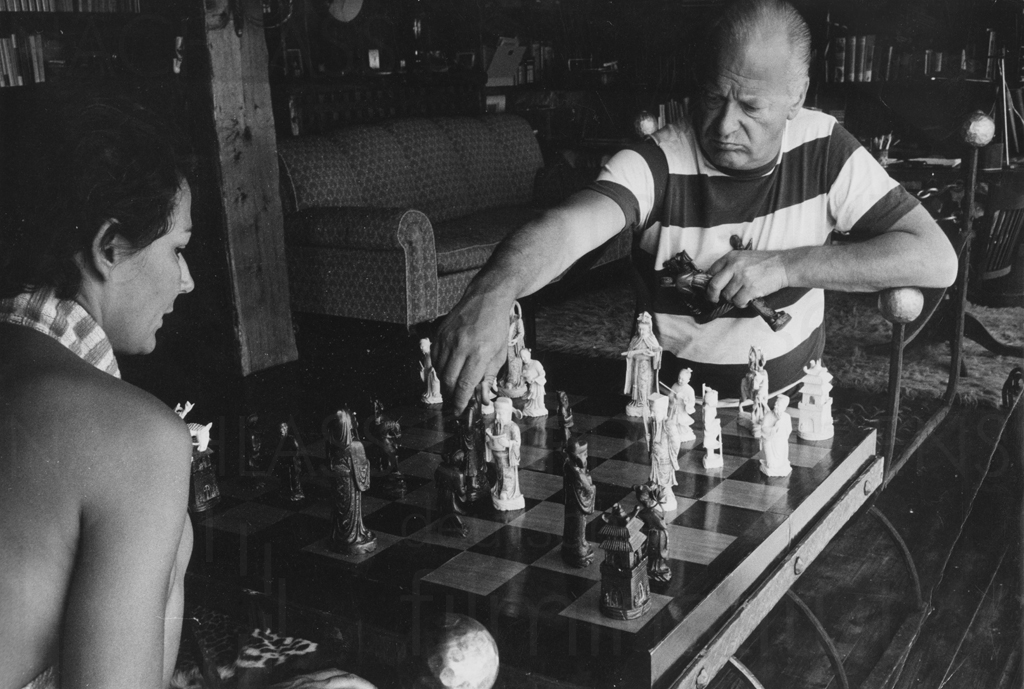 I felt obliged to warn him. “Be careful. I was a bit of a child prodigy at chess. Which was true. I was just five years old when I contested my first tournament. That was in Lodz, my home town. Later I played simultaneously, against twenty opponents at the same time.

Jürgens just said: “Come on then, you precocious prodigy.” He took the chess board, couldn’t find anywhere to put it, and without further ado laid it down on the carpet. We crouched down in front of it and set up the pieces. In no time, there were a dozen guests standing around us.

“What shall we play for?” I asked hypocritically.

“What shall we play for? Just for the honour of it of course,” Jürgens said, in his voice that always sounded as if he’d been gargling with drawing pins every morning. Then he thought better of it. “Honour is a bit small. Let’s say, a crate of very old Scotch whisky, okay?”

“I would suggest something else.” In the sudden silence that emerged I said slowly: “If you win, you get your whisky. But if I win, you’ll play Peer Gynt for me. Okay?”

He squinted at me, grinned and said: “Nightingale I hear the tramp of your feet.” And then after a short pause: “Okay. All right.” He decisively moved the king’s pawn from E2 to E4. The game lasted nearly two hours and the quality of play was so interesting that it should have been recorded in a chess manual. Jürgens sparked an aggressive fire that all but left me deaf and blind. I soon noticed that he favoured a variant used successfully by the world champion Alexander Alekhine. I deployed the Sicilian defence. 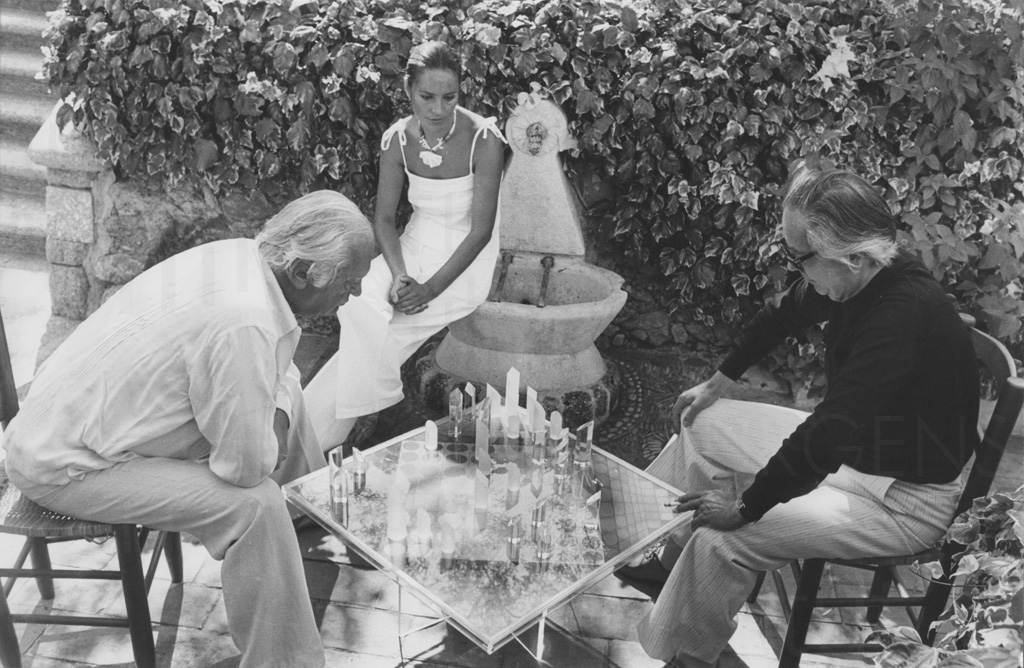 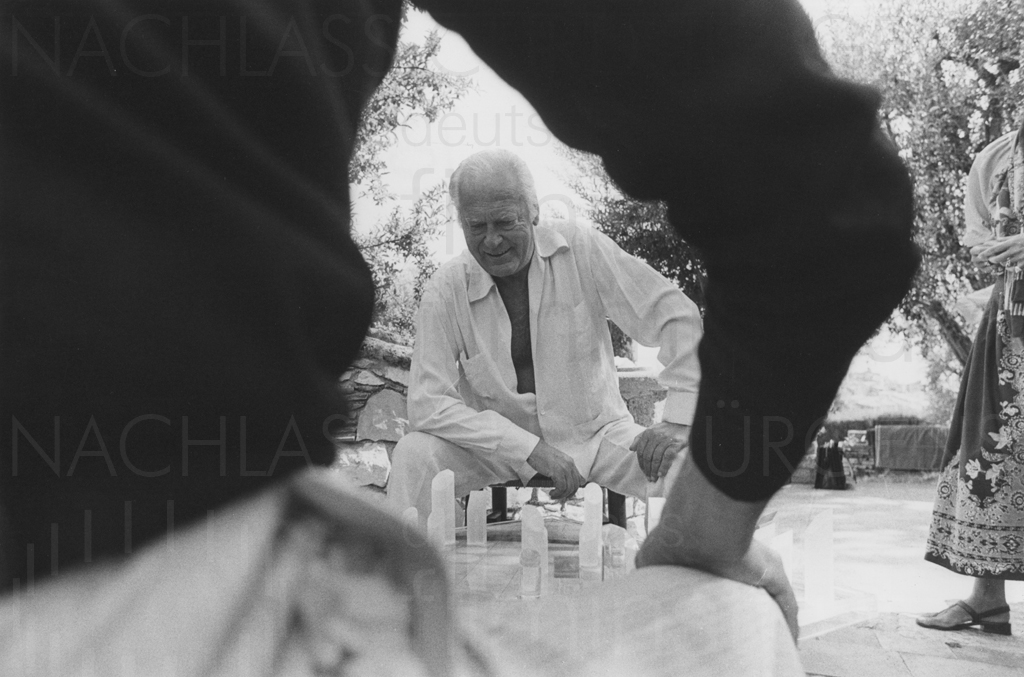 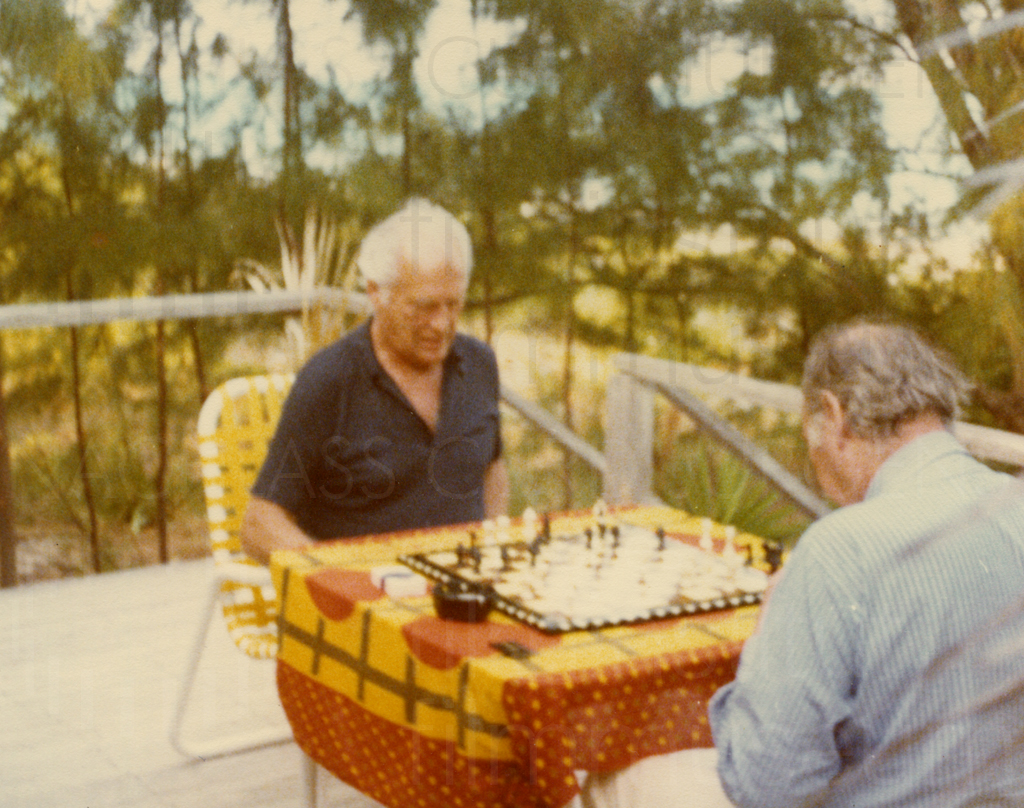 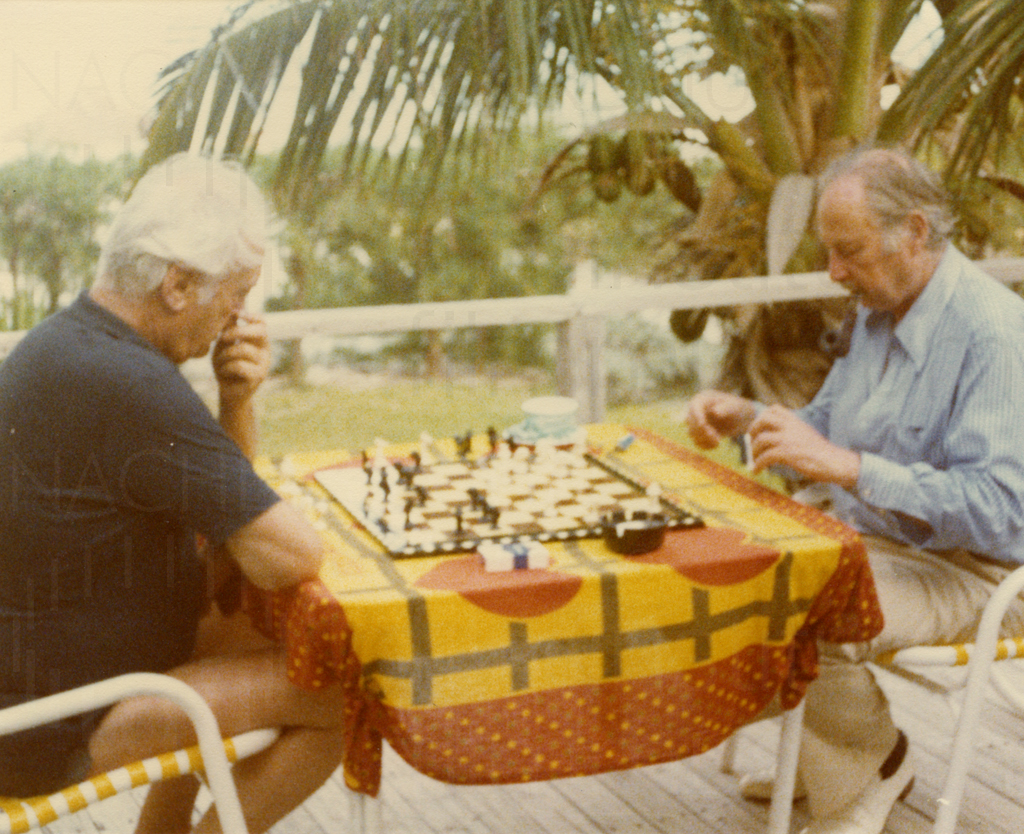 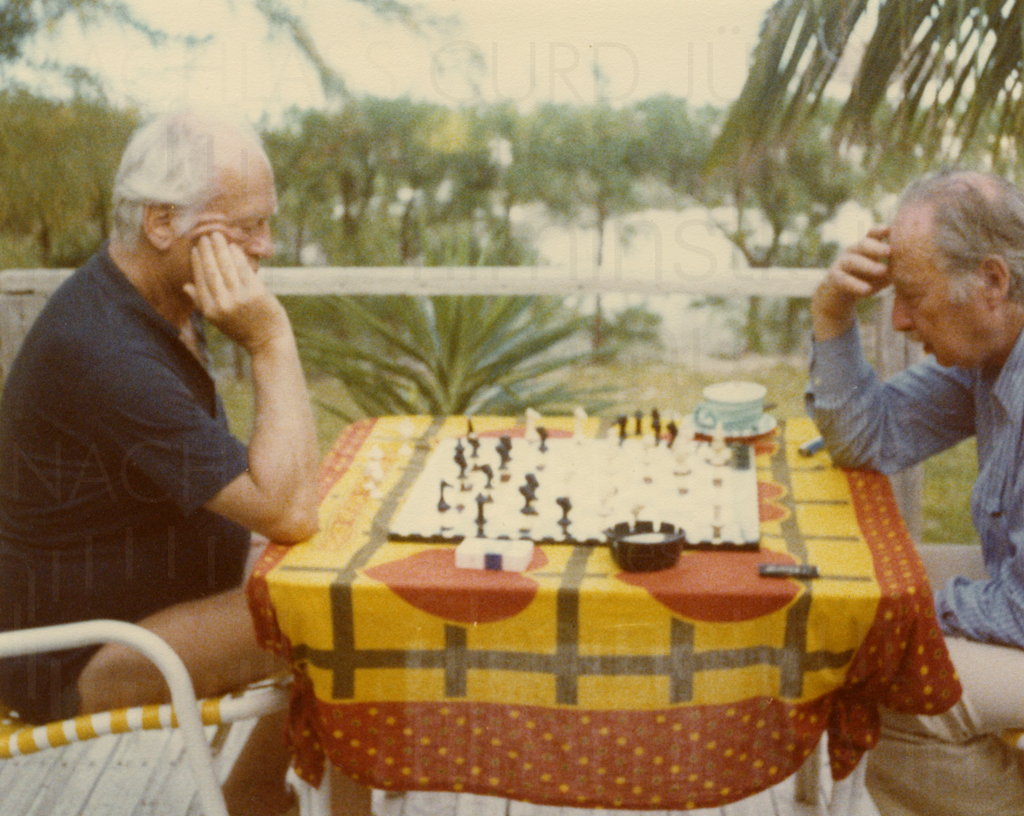 At move twenty-two when he moved the knight I took a deep breath. It was exactly the move I had anticipated. I pushed the queen incisively forward and said quite placidly “Check.” Any authority could see that Curd’s position was hopeless.

He looked at the board for a long time. The onlookers fell deathly silent. Through the glass door dividing us from the other guests came the sound of Caterina Valente’s singing. I can still see Hans Söhnker standing before me absent-mindedly wiping off the ash of his cigar against his neighbour’s champagne glass. O.E. Hasse was whistling through his teeth. And Martin Held was muttering something to himself that sounded like “Mouth shut, monkey dead, over and out.”

Suddenly Curd’s hand jerked forward and with a jolt pushed all the pieces together. He capitulated. “My compliments, Artur; well done,” he said and shook my hand. I took out my chequebook and wrote in the column “German Marks in Words” the number “thirty thousand”.

“Advance payment for Peer Gynt” I said. “You will receive the contract tomorrow by express mail. Okay?”

“Okay, Atze,” he said, half in annoyance, half in acceptance.

I sang some particularly sad songs that night which I always do when I’m especially happy. One of the songs was “Kak bakal pienistyi aromat rasnosyt … The foaming glass exudes the scent of the rose”. A Russian drinking song. When you sing it, the glasses have to be smashed against the wall. There were soon quite a few empty spaces in Sonja Ziemann’s display cabinet.