MEMORIES OF A FILM PROJECT

In 1956 some of us in Göttingen wanted to make a motion picture in our film construction company Filmaufbau GmbH for Kurt Schorcht, our main distributor in Munich. The film was about drugs which was becoming a highly topical theme. We had made three important preliminary decisions and taken Curd Jürgens on board as principal actor, Wolfgang Staudte as director and Franz Geiger as screenwriter.

My friend and production partner Rolf Thiele and I went on a finance trip. When we came back to Göttingen, Franz Geigers’ treatment, with the help of Wolfgang Staudte, had been turned into a screenplay in which we, with the best will in the world, could no longer identify “our” material. But our requests for changes met with opposition on both their parts. The hope of reaching agreement was costly both in time and nervous energy, which at times meant the same thing.

It came to the point where I could only see one radical solution: to ask them, two people we valued highly and who we had brought together in the first place, to forgo the agreed development of the film project – all above board with full payment of their fees. To prevent any bad blood over this clash, I told them upon leaving that I would do my utmost to make a film with each of them in the future. This time we parted chivalrously, as it were …

Congratulations from the Brazilian diplomat Abelardo Bueno do Prado, 27.1.1950 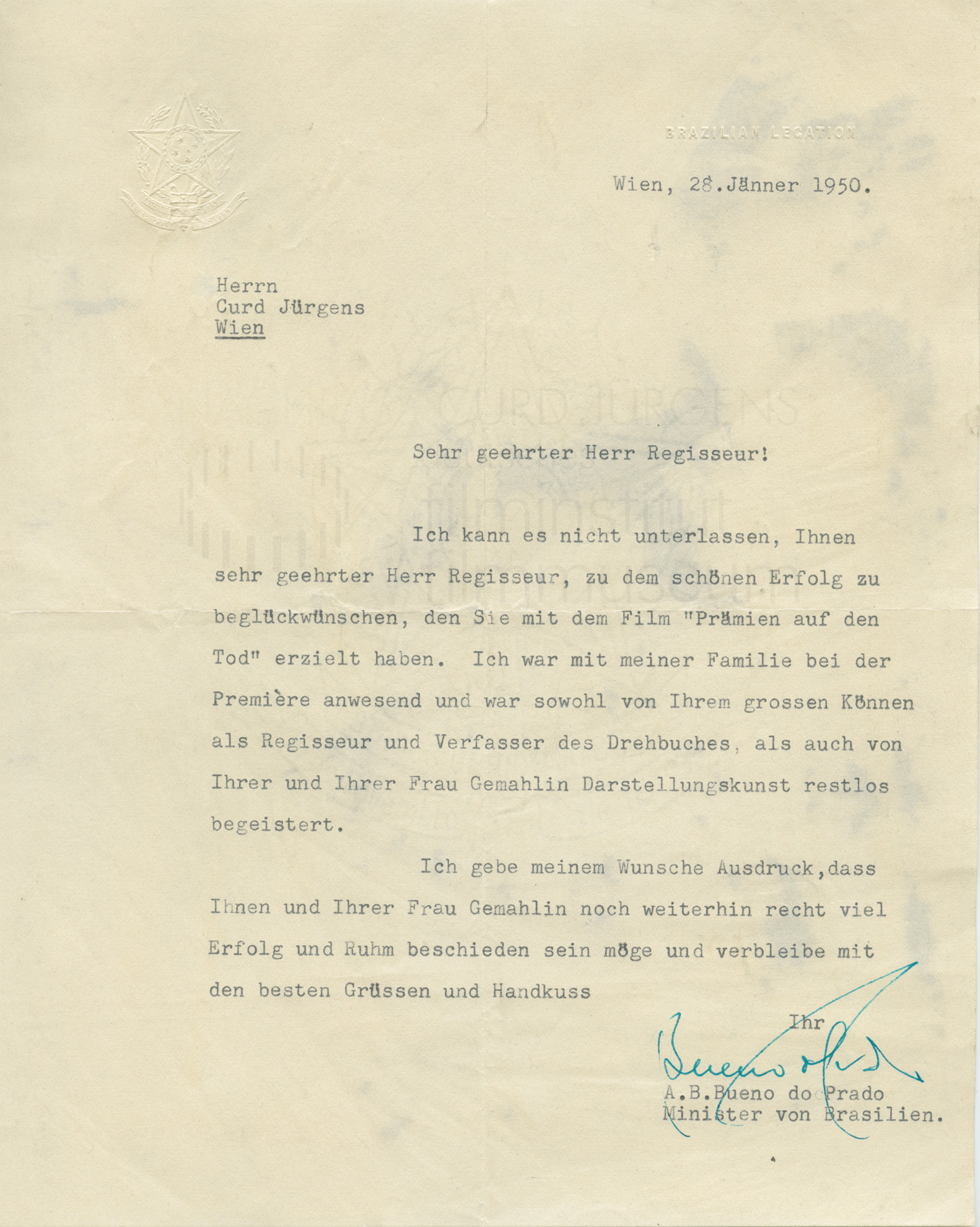 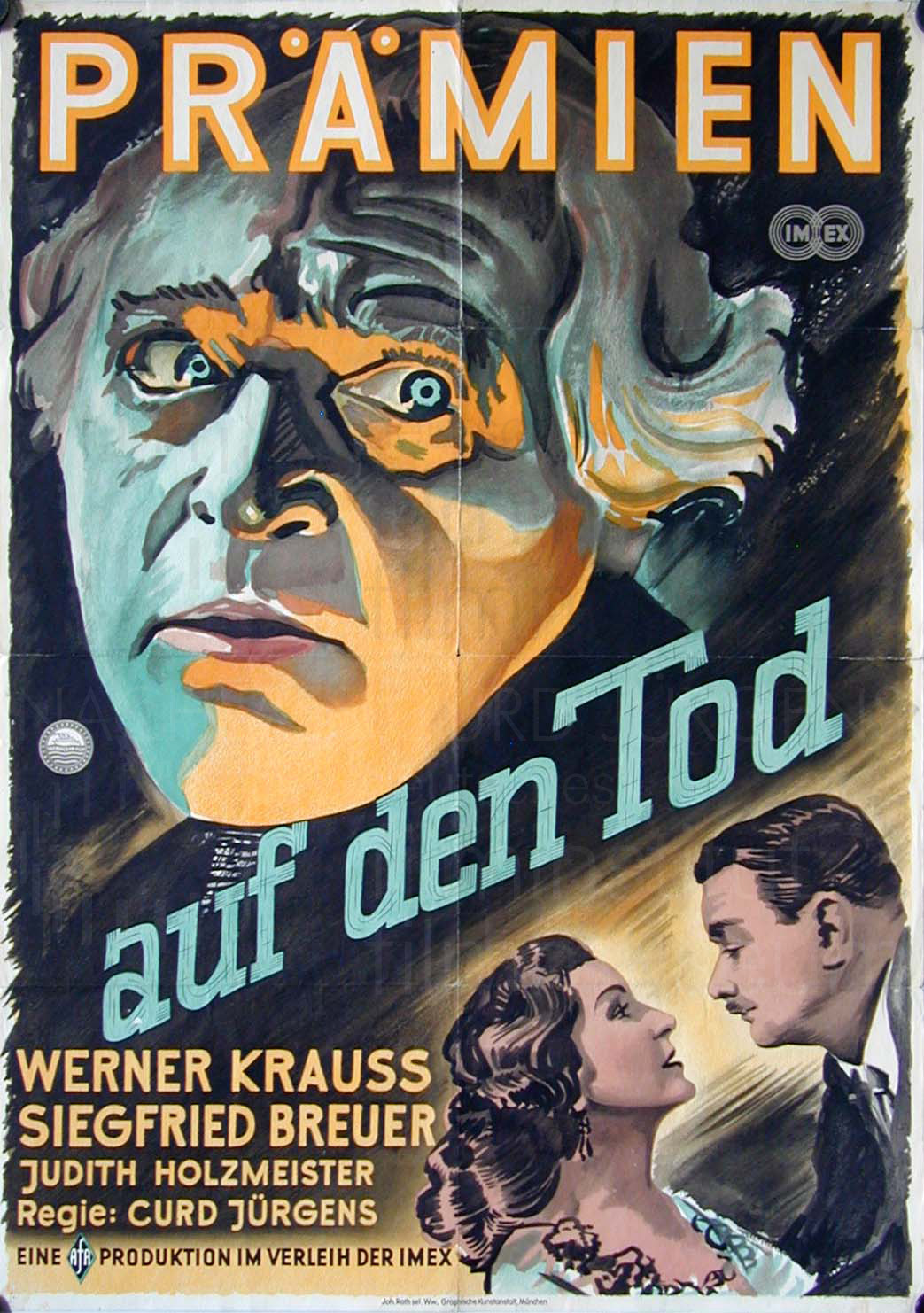 Part of the sets was already standing in the studio. The question was now becoming one of costs. I did not want to give up (yet). In any case, I had never made any incisive decision of that order. When I telephoned the distributor to inform him of change of screenwriter and director, he sent round an amenable security commissioner in the shape of his legal advisor. After our consultation, our potential emergency helper reported back to his boss that the company wasn’t seaworthy but might just about manage a crossing of Lake Constance. That was pretty much his expert opinion. But the revered and veteran distributor Schorcht, after a pause for thought, pulled the plug on the project. In Göttingen we were now well and truly laid bare.

Rolf Thiele was at my side again as we rushed off to Chiemsee to see Curd Jürgens. We knew about each other but had not met personally yet. In conversation with the star at his rustic house-bar we talked through the film – the one we were thinking of – in a way that made us think Jürgens was the only person who stood by our project with a full understanding and a proper conception of his role in it.

We slept on it and over breakfast I came out with an audacious but reasoned plan: I would offer Curd Jürgens the position of director and I would ask him to narrate the story of his and our joint film, there and then that very day, and we would record it on tape. The working title of the film was to be “Without you it becomes night”. From the tape I made sure that I could create a replacement screenplay in our not hopeless necessity. Good old Rolf still looked a bit anxious. But I was familiar with Curd Jürgens’ only work as director. It was PRÄMIEN AUF DEN TOD, an Austrian film made in 1949 with the woman who was then his spouse, Judith Holzmeister. In its time this film had made a huge impression on me, both in style and tracking. Thiele drew hope from this too. Jürgens was clearly impressed by my faith in him and said he felt up to this unfamiliar sharing of responsibility. He had enjoyed our visit.

As tenor Gunnarson in PRÄMIEN AUF DEN TOD (1950), together with Judith Holzmeister 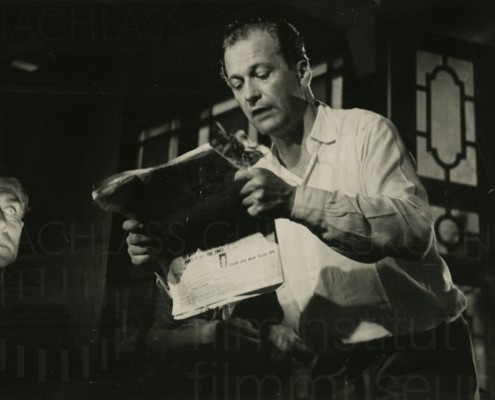 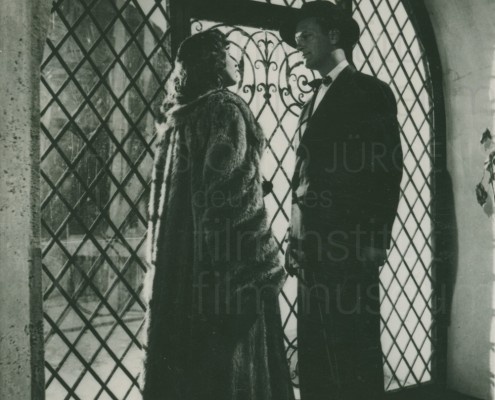 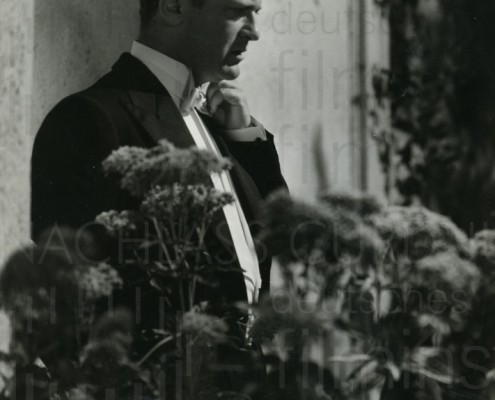 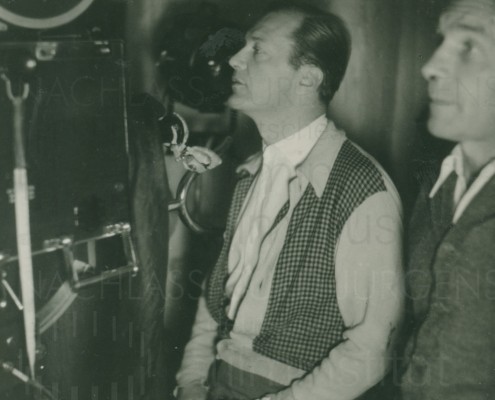 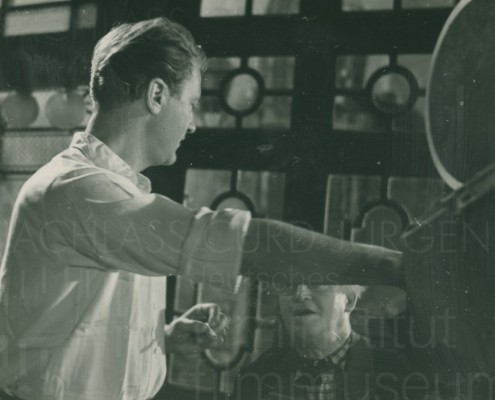 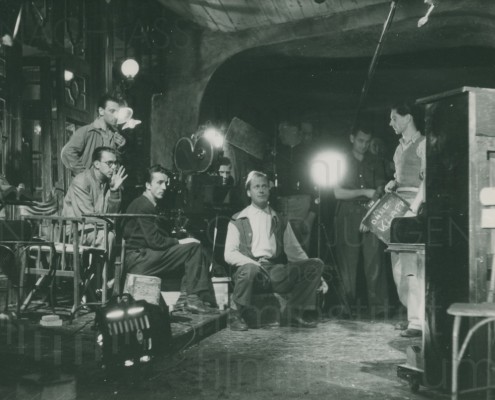 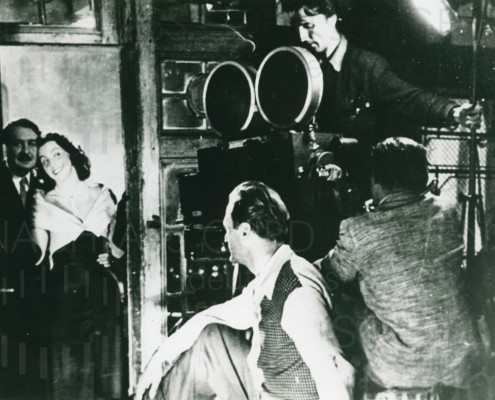 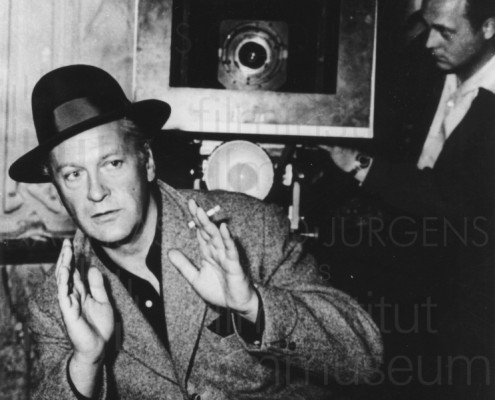 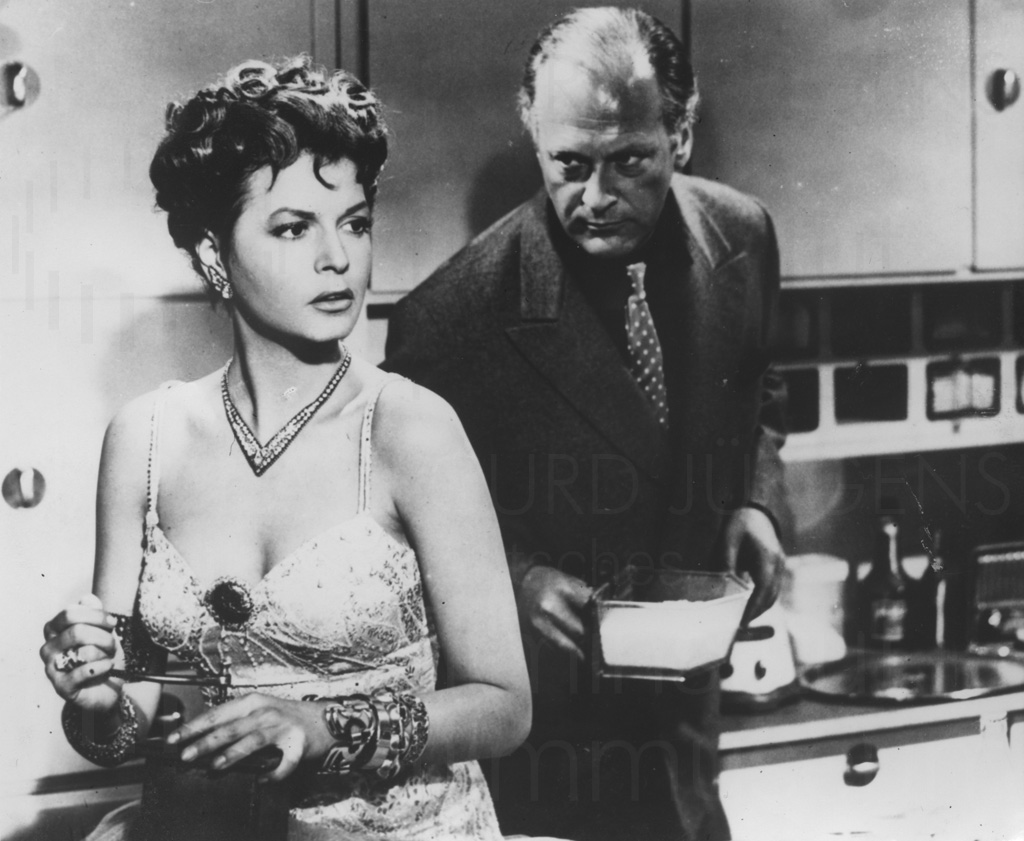 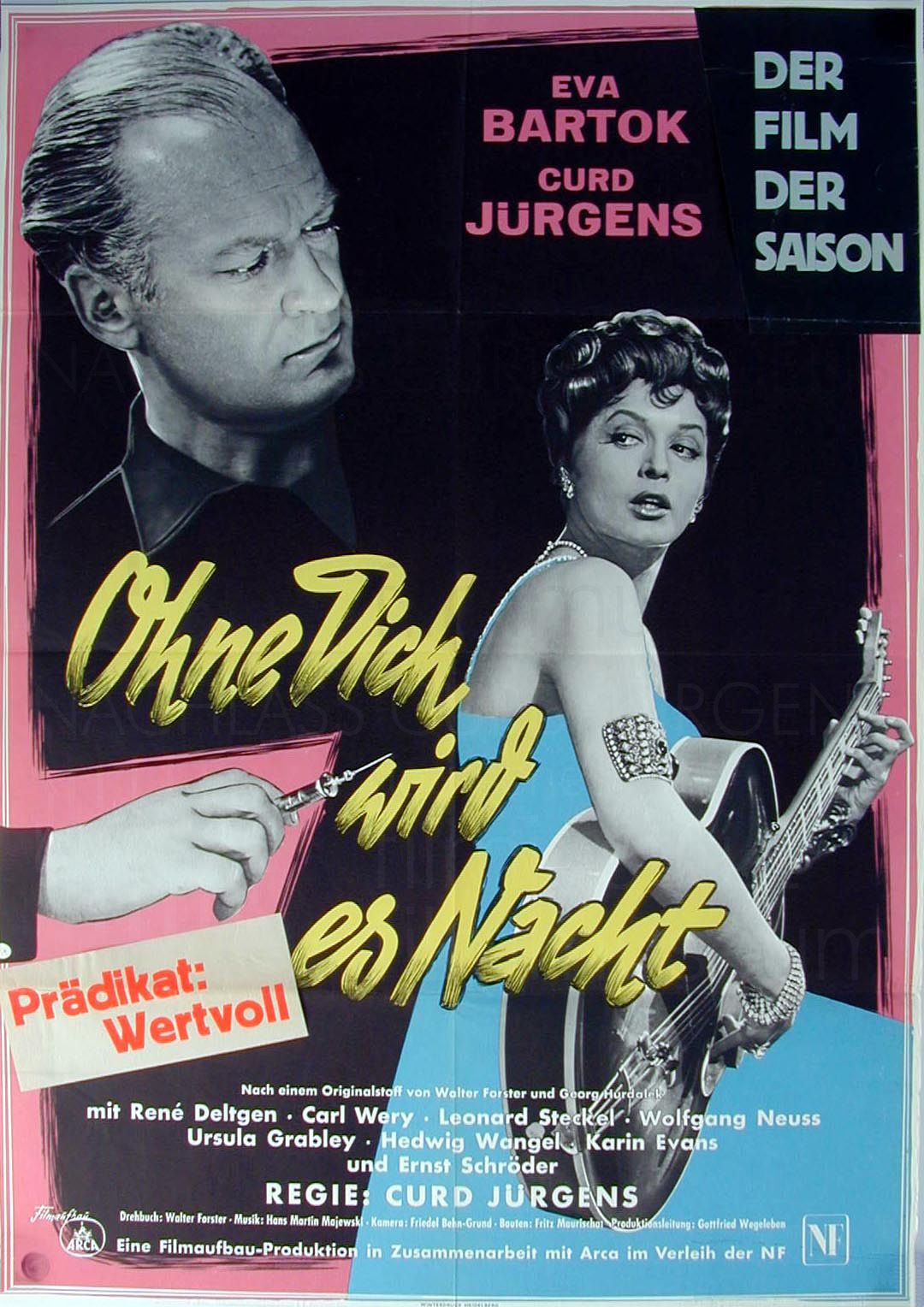 My next fear was to do with securing support for the project with a fresh distribution contract. The first attempt was planned for Hamburg with two serious distributors there. To cut short waiting times, I telephoned Hans-Martin Majewski, who was to be the composer of the score, and asked for his help: Could he perhaps send his son to see the distributors in Hamburg where he lived? Only he mustn’t get the cover letters mixed up. I would try and arrange the rest when I phoned the two distributors. Majewski’s support didn’t come to anything. The distributor who had already worked with us continued to hesitate; the other one, who only knew our (good) reputation, at first agreed in principle to our unusual scheme.

It was our first collaboration with the Neue Filmverleih whose boss, Sir Horn, was based in Munich. He fixed us up with our Göttingen competitor Gero Wecker as co-producer. In our plight all I could manage was to arrange for it to be a “silent” co-production. Decision-making remained with our company, Filmaufbau, but directives had to be agreed overall with Arca-Filmproduktion. It was not an easy process but one which colleague Wecker did not exploit (our star’s agent was present at the first encashment in our studio by way of precaution).

Some finer efforts seemed necessary before filming began. Not for the first time, the production assistant I had at my side was the intelligent and dependable Gottfried Wegeleben. Where else did I go for other advice? The director was Josef von Baky who, until then, I only knew distantly. He suggested the theatre director Rudolf Noelte who had the reputation of being difficult, but in the film production climate of Göttingen would certainly bring in modest returns (because of being still new there) – as they would perhaps have said nowadays.

Above all he said that he recommended Noelte to us for the dialogue direction. This was to be of particular benefit to his leading lady Eva Bartok; the Hungarian actress and her husband Curd Jürgens would have their hands full with screenplay and directing, I telephoned Noelte; he was surprised and joined us. Gottfried Wegeleben in particular took care of the extra work that Noelte and Frau Bartok took upon themselves. We were well-known in Göttingen for our friendly atmosphere and Noelte relished this new experience and helped us all most commendably.

I still remember our film OHNE DICH WIRD ES NACHT (Without You it Becomes Night, 1956) very well, but in all the years since them I have only seen it once. I really now need at least to touch on the principal feats say of the cameraman. For example, one screenwriter completed the austere task, right up to the point when we started filming, of transcribing Curd Jürgens’ legendary audiotape into a screenplay everyone could read. That was the author Walter Forster from Lake Tegern. Original ideas were allowed…

But this memoir claims to be about our “saviour” from those times. And so it should be recorded that this Curd Jürgens, who became and remained a friend to us, mustered a serious and yet at the same time cheerful composure both before and after the daily filming, despite the fact that he could have complained about special exertions arising from how the film first came about.

Telegram from the “Neuen Filmverleih” to the world premiere in Hamburg (17.8.1956) 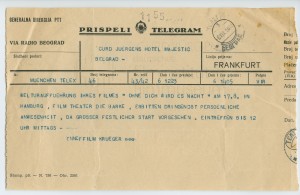 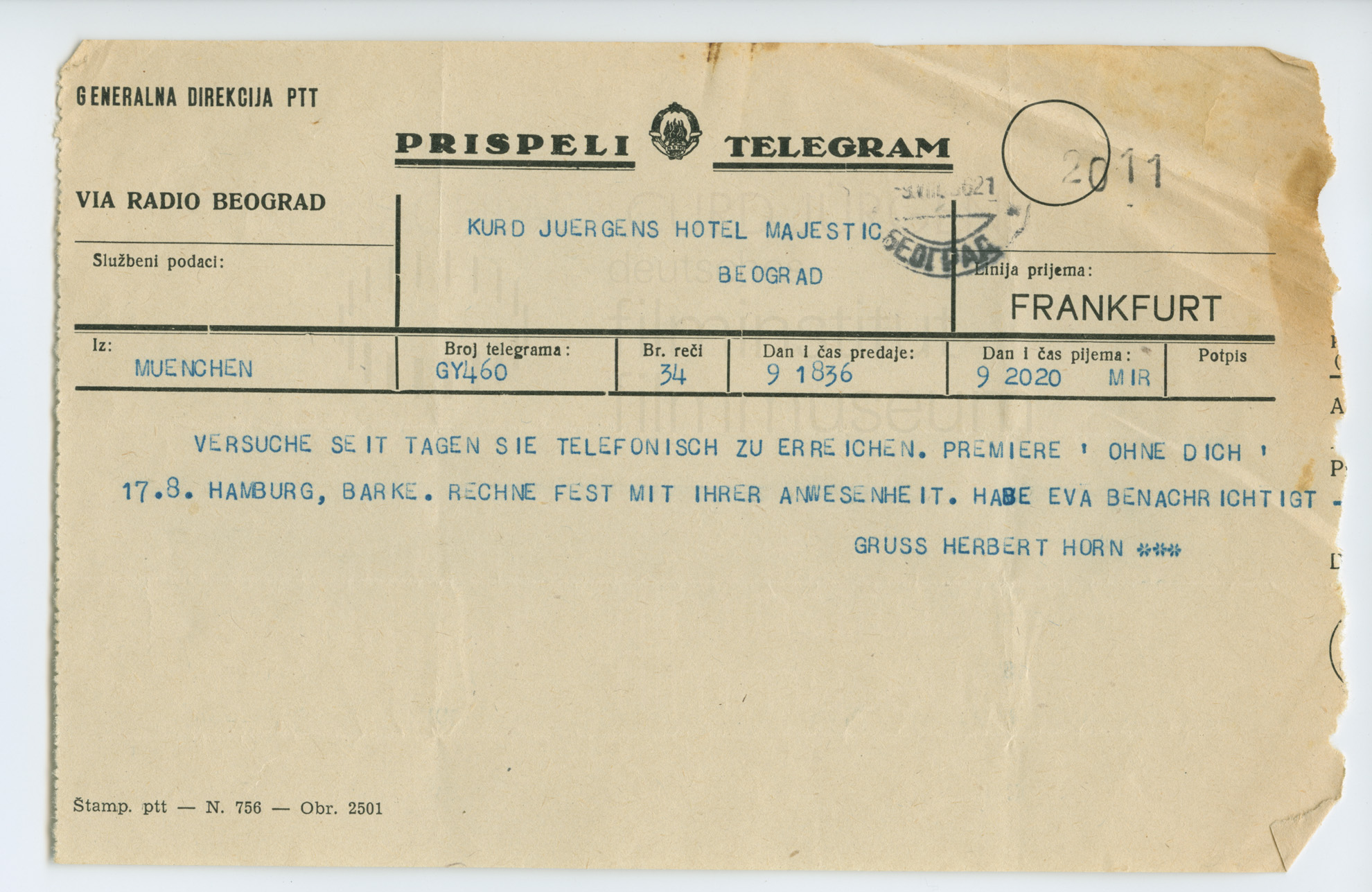 Jürgens and Bartok – at that time they were a lovely and spirited couple. And so it was a little saddening when, at the world première of this early film in Hamburg, it was evident that something in the Jürgens-Bartok marriage had begun to crumble. I think of them both with gratitude.