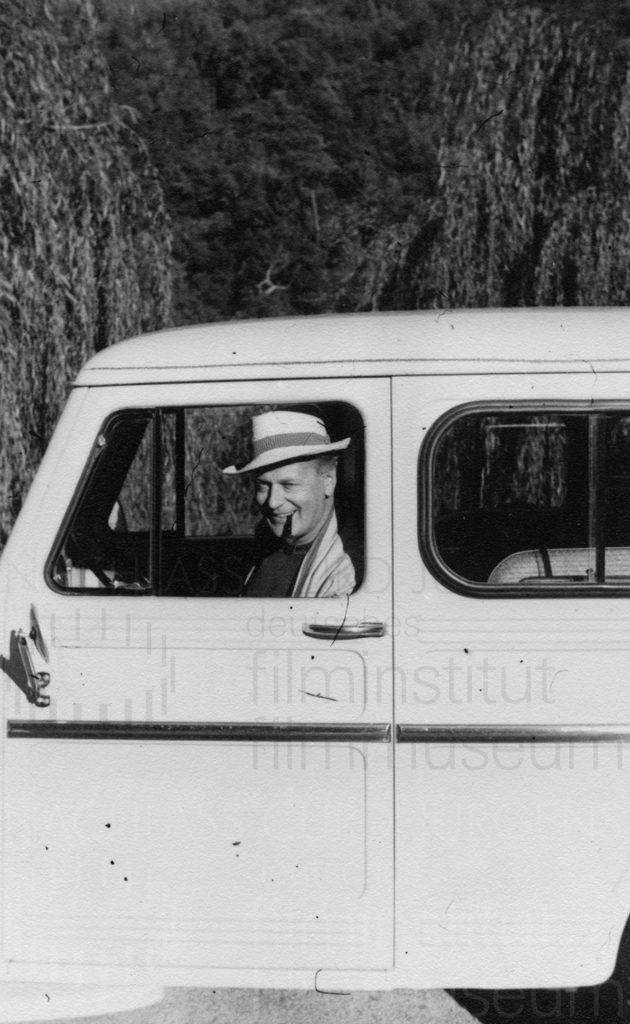 In the last ten years of his life when I was employed as his accountant, I was constantly astounded by his level-headed objectivity and matter-of-factness, his sober intelligence and acceptance of unpleasant but unavoidable ramifications, by his absolute trust, when he was having to deal with legal and fiscal issues. He never came to me with smart-alec notions – although he was certainly surrounded often enough by people who were know-alls and by advisers who tendered him (ostensibly) better ideas and suggestions. He saw through such posturing and show very quickly and was never taken in. I can quote from a letter he sent me, a particularly well-turned judgement that Curd Jürgens made concerning the type of adviser that seemed to have underestimated his clear and logical acumen: “The agency … (I shall, as an act of kindness, not reveal its name) is over-zealous and likes to overwhelm its clients with impending tax clouds, just so that it can be marvelled at when the sun comes out again after the storm.” 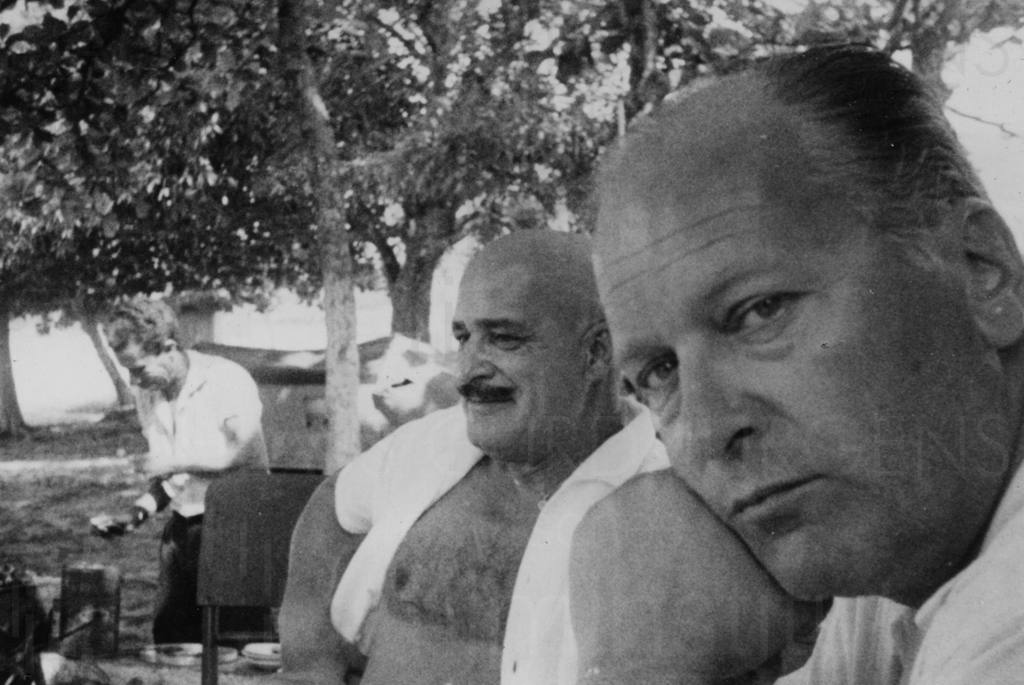 Another reaction of Curd Jürgens was characteristic of his pragmatic attitude and his way of not taking everything seriously, himself above all. Once, when I was making great efforts to explain in detail the facts of a case and attempting to turn around a somewhat muddled affair by getting my hands on every conceivable bit of information, he wrote me a terse note: ”The exhaustiveness of your communication is touching but, in my opinion, unnecessary. When you ask a lot of questions, you get a lot of answers. When you obtain a lot of answers, you often get a lot of trouble.”

In his personal dealings, Curd Jürgens was nothing at all like the picture of the great “star” presented to the public by the press. Of course, he thoroughly enjoyed the glorious life style and fame. But he flaunted his stardom much less than many of his nowhere near so famous and gifted acting colleagues. I have never known him as anything but someone with exceptional courtesy and conviviality, diffidence and – yes, indeed – modesty in his demands on his surroundings. Every assignment for him was a polite request and when he needed me on urgent business, say at the weekend or he had to ring me up at home late at night, he apologised profusely. There was one thing he did not have that people who did not know him insinuated that he did have: and that was star allure. Quite the contrary, he loved to make fun of himself, and he loved it when people, apparently in awe of the great international star, wouldn’t dare say anything unpleasant to him or reproach him if anything went wrong. Curd Jürgens would always defuse these situations with disarming plainness and frankness. 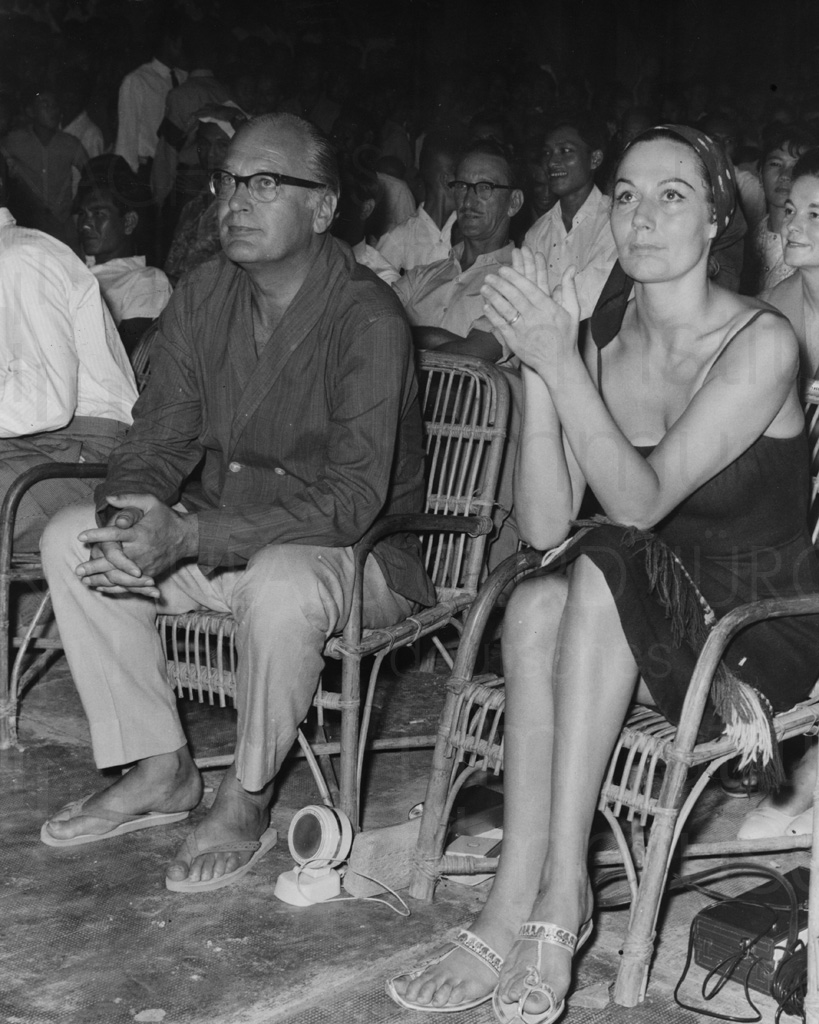 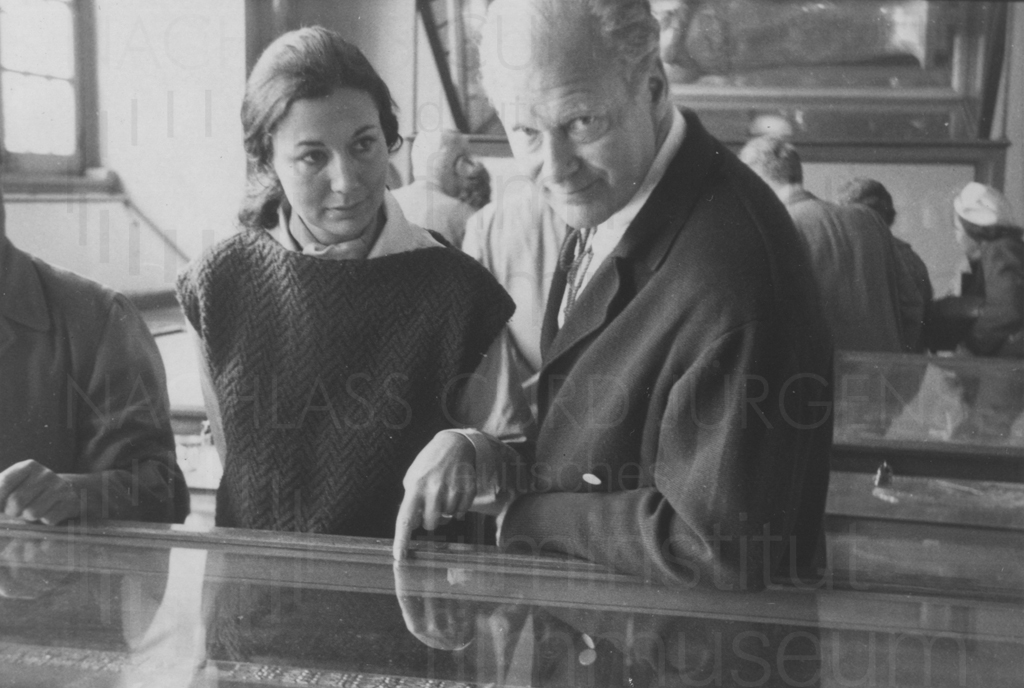 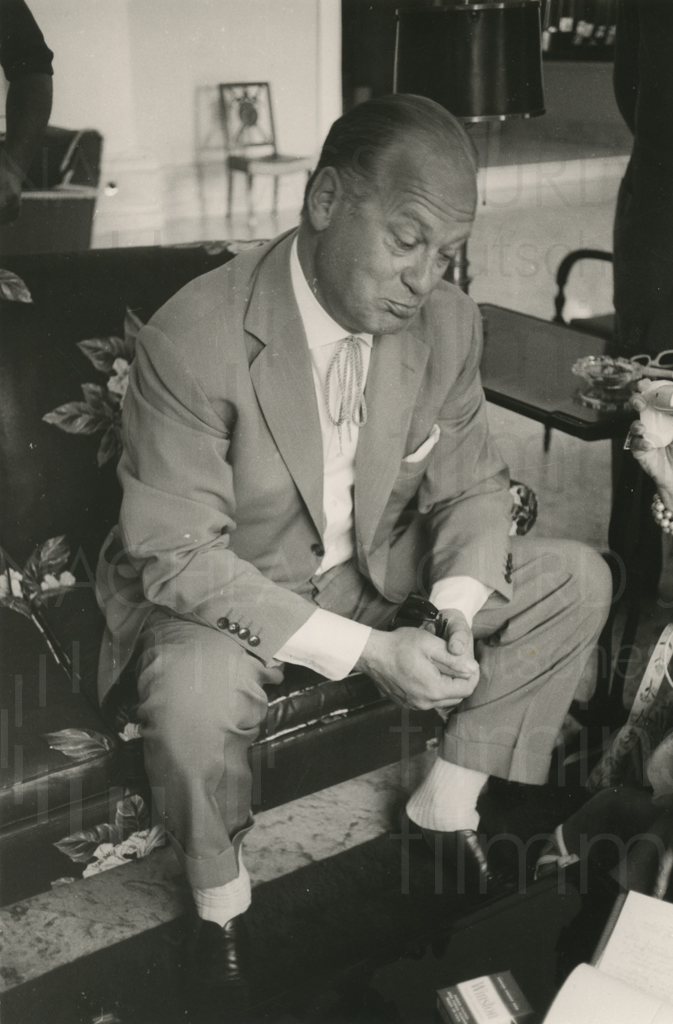 A further trait that I learned about Curd Jürgens in the course of the years – and one that did not fit in with the clichés of his public image – was his understanding and sympathy for young people in revolt against established bourgeois society.

Once when a quite considerable investment sum that I was managing became free, he surprised me with his plan of using the money to set up a young relative in business who had come off the rails and was eking out a questionable existence as a dedicated hippy in Frankfurt am Main. Having met the young man and after having had a long conversation with him, Curd Jürgens was clearly moved by his enthusiasm and his idea for buying up a run-down cinema in the Frankfurt student area with some friends, and then opening it up again as an arts cinema with a café or bar. The cinemagoers would have the opportunity of lingering in house after the film in a cinema-like atmosphere. That was a long time before the so-called “Kino-Kneipe” (“cinema-pub”) and the “Film Café” came into fashion. I only needed a brief overview to tell Curd Jürgens that the financial requirements for this enterprise would be quite considerable and a return on the investment more than doubtful. However, that did not deter him: “We have to do something for young people. They don’t ask for any financial return for their involvement, but just go out and do it. This idea of repertory cinema and student pub – I think it’s great.” So I took in hand all the negotiations with the banks, the breweries and the landlord etc. When ultimately nothing came of the project, it was a huge disappointment for Curd Jürgens.

Trip through England in a Rolls-Royce, 1963 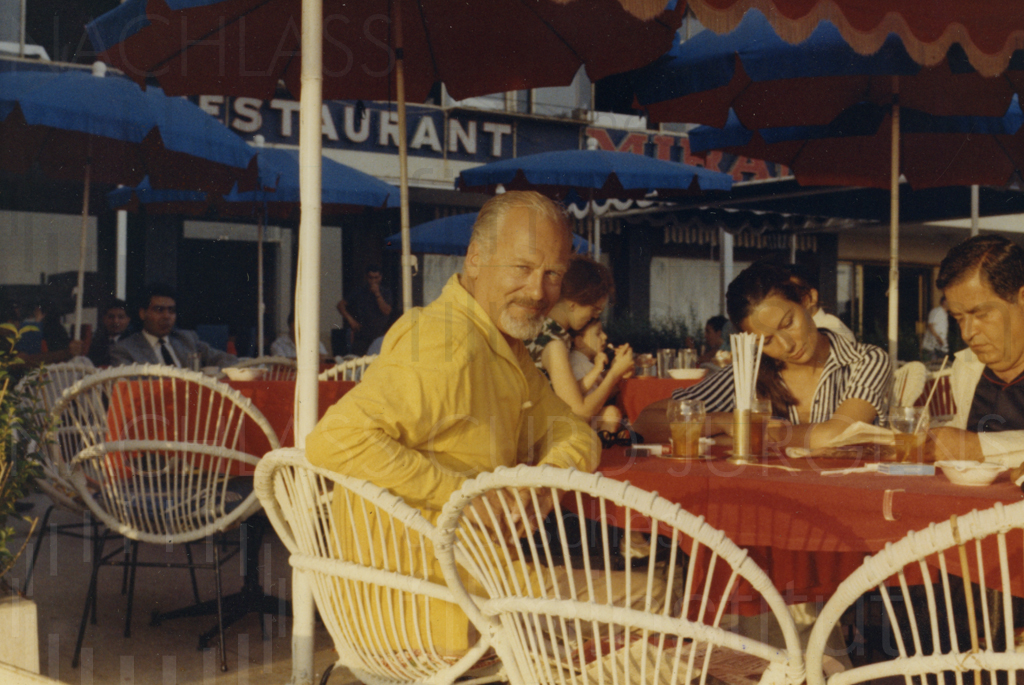 Nonetheless, Curd Jürgens’ attitude to young protesters who questioned established society did not change as a result. Reading his second book “Der süße Duft der Rebellion”, published in 1980 and set in Central America and Mexico, you come across statements about guerrilla warfare and revolutionary upheavals in the area that show a committed sympathy towards the young rebels. This commitment of Curd Jürgens – so much at odds with the popular clichés – evidently scared the big bosses of a large German newspaper publisher to such an extent that they categorically rejected the “blind” advance publication of the novel in a large family magazine. They preferred to write-off the considerable advance payment they had rendered as a bad debt rather than let the Curd Jürgens of this vein address their readers. Yet this committed assertion would probably have been more in keeping with the “authentic” Curd Jürgens than his conventional public image, because, actually, Curd Jürgens was quite different. 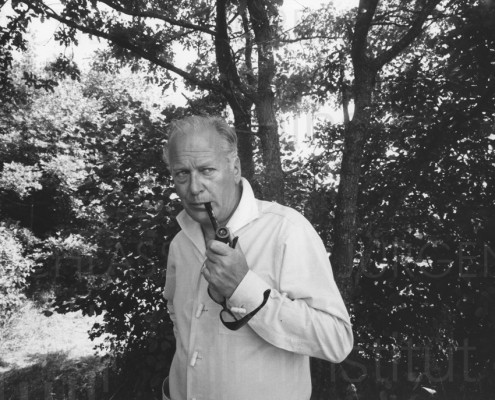 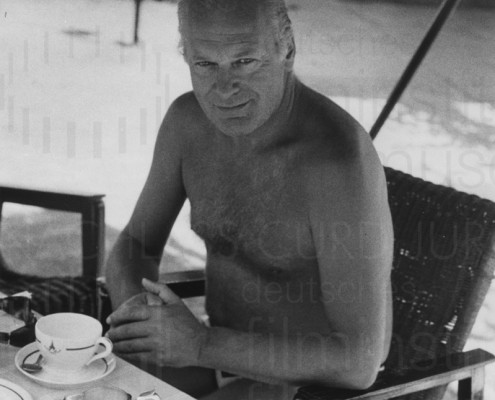 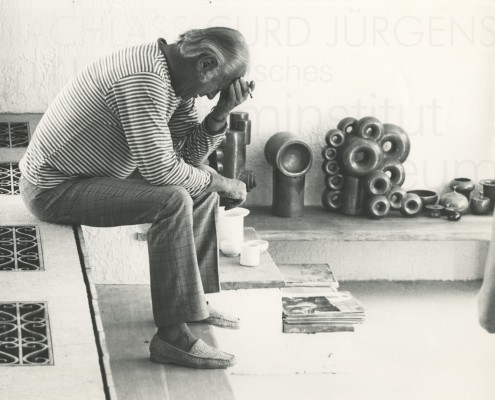 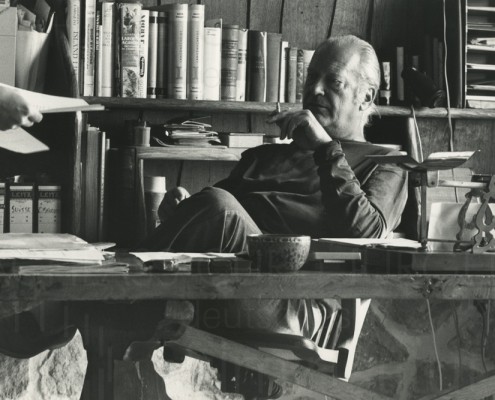 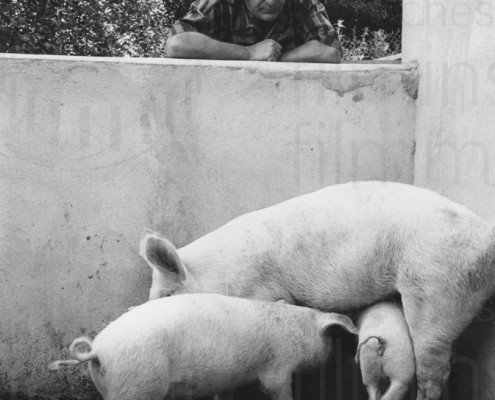 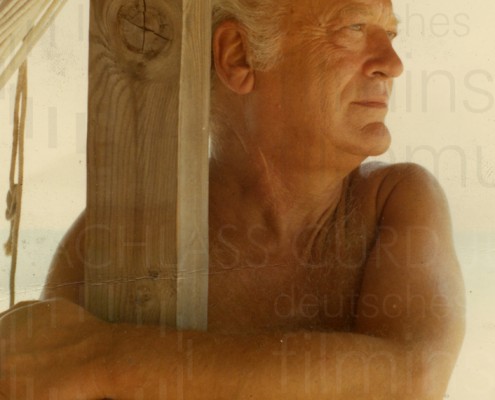 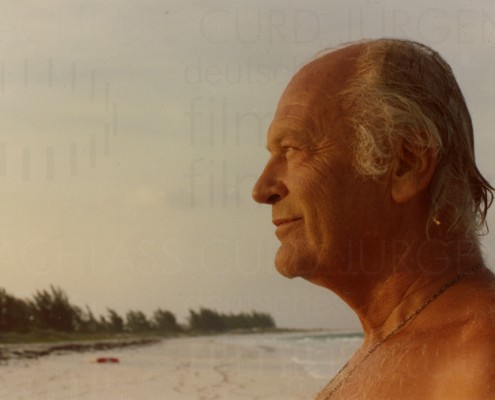 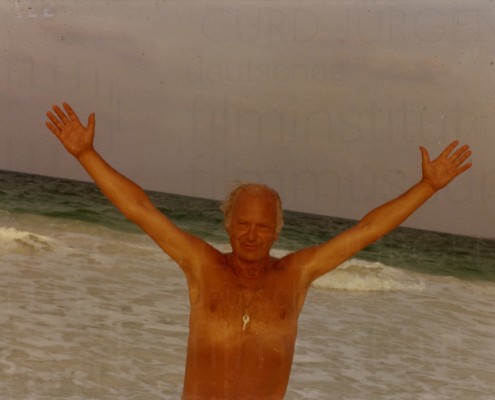 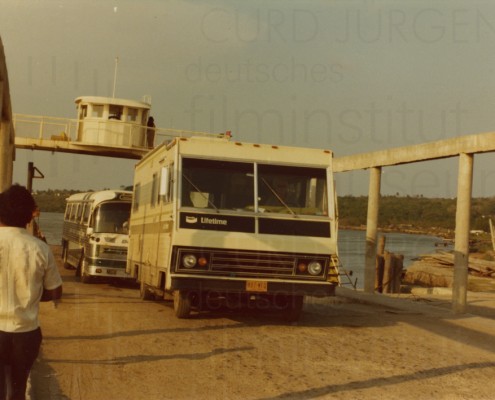